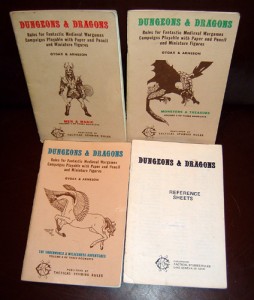 TSR. Gygax. The names may mean nothing to you, but to me, they were once words of power, for TSR (Tactical Studies Rules Inc.) published Dungeon & Dragons…and Gary Gygax, who cofounded the company in 1973 with childhood friend Don Kaye, created that seminal fantasy role-playing game, along with Dave Arneson.

Now comes news that Luke Gygax and E. Gary Gygax Jr, sons of Gary Gygax, are relaunching TSR Games: a new company with the old trademark, which they purchased after it was abandoned by D&D owner Wizards of the Coast (itself owned by Hasbro) about nine years ago. They’re also launching a new gaming publication, Gygax Magazine.

Why do TSR and Gygax mean something to me? Because, although officially I majored in journalism and minored in art at Harding University in Searcy, Arkansas, based on hours devoted to a topic it would be more accurate to say I majored in Dungeons & Dragons and minored in everything else.

I had never heard of D&D when I started university, but fairly early on I met and made friends with Andrew Crossman, who certainly had. Andy, who was from Arlington, TX, had been playing the game for years. He soon had me hooked, and it wasn’t long before weekends were largely devoted to the game, at first in the common room of our dormitory, but later, as our circle of gamers expanded, in the snack room of one of the university’s central buildings.

How devoted were we? We’d start Friday evening, play late into the evening, start again the next day and play all day, and often continue playing on Sunday (after church, of course).

At the beginning of my university studies we were playing from the original D&D rules, three skinny, cheaply-printed manuals illustrated with amateurish black-and-white drawings. In 1977, TSR released Advanced Dungeons & Dragons (hardcover, but the art was only marginally better) and we began using it…

…or sort of using it, because truth be told, the version of the game we played often bore little resemblance to the rules as laid down in the manuals. We had a set of “house rules,” some drawn from unofficial supplements to the game, some of which we’d come up with ourselves, that we thought made the game play more smoothly.

At first I was always a player, but it didn’t take me long to become a DM (Dungeon Master). I found I’d much rather run the game than just be along for the ride. And although there may have been a few published game modules—pre-packaged adventures—out then, we mostly created our own: so in addition to the many, many hours I spent playing the game, I spent many more creating a whole world, mapping dungeons and ruins and cities and castles, mountains and meadows and caverns and chasms, “rolling up” monsters to populate them (in D&D, you “roll up” all sorts of things, since dice: four-, six-, eight-, 12- and 20-sided, govern all).

Most of that world was never played in. It still exists: there’s an old briefcase in a closet that holds all of my D&D stuff, except for the dice, which for some reason are right here in my desk…not that I use them to create my fictional characters, although sometimes it’s tempting.

And therein lies one of the reasons I quit playing D&D.

Not the main reason, perhaps: that would simply be that I graduated, and returned to Weyburn, Saskatchewan, as a newspaper reporter for the Weyburn Review, and although there were a few D&D players in Weyburn, no doubt, they were mostly high school students and I wasn’t exactly in their circle of acquaintances, nor they in mine. For a couple of years I returned south for my vacations, and would play with my old college friends (especially with Andy, who was my roommate at Harding after my first year there, and at whose wedding I was best man), but the magic was slipping away: and one day it struck me that the vast creative energy I had poured into D&D, creating whole binders worth of details about fictional places and characters for games that in the end never took place, was energy that would be better utilized in creating fictional worlds for my novels.

What is an author, after all, but the ultimate role-playing gamer? He or she is everything rolled into one: maker of the rules, creator of the non-player characters, inhabitor of the minds of each of the player characters, and, of course, Dungeon Master, keeping the game moving along, making sure everyone has a good time, or at least dies in an interesting and appropriate fashion.

Dungeons & Dragons has moved far beyond those early years, from what I can tell (I haven’t kept up with the changes in rules or the vast array of books, computer games, movies and more that have occurred), and so, I guess have I.

But I’ve never felt my D&D-playing time was wasted. I had wonderful adventures in the company of good friends (and the company of too much Coke and junk food, admittedly), and I even made use of that vast world I created: my second YA novel, The Dark Unicorn, makes use of the place names and geography, although the story and magic owes nothing to any campaign I ever ran.

Now, full circle, my daughter has expressed an interest in trying out D&D.

Maybe it’s time to break out the dice and roll up a few characters once more.

Permanent link to this article: https://edwardwillett.com/2012/12/tsr-gygax-dd-me/