The science of tall trees

On narrating the audiobook of my own novel 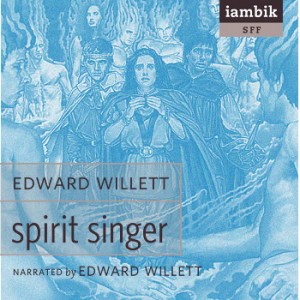 The audiobook version of my young adult fantasy novel Spirit Singer (the book which is also soon to have a new print and ebook edition from Tyche Books), is now for sale at Audible.com, which is exciting because a) you never know, someone might buy it, and b) I narrated it myself.

Spirit Singer is the third book I’ve narrated for Iambik Audiobooks: the first was The Other by Matthew Hughes, and the second was a non-fiction book on child development (well, a few chapters of it) for Pearson.

And what have I learned?

Different things for each book.

Narrating The Other, I discovered there’s no pleasing everyone: although the proof listener at Iambik praised my narration, the only reviewer to thus far post an opinion of the audiobook (even though her name is Alice, like my daughter) was…um…less than impressed.

On the other hand, my almost-blind 90-year-old mother-in-law (who is also named Alice), who listens to a lot of audiobooks, liked my narration way more than many others she hears, so there.

Narrating the textbook on child development, I learned that you should really look up the pronunciation of difficult words before you start recording, so you don’t have to run off to the computer in the middle of the chapter and edit out the swearing.

And narrating my own book…

I discovered if you’re a man with a deep voice and your narrating a book featuring a teenage girl protagonist, you really can’t make yourself sound like the character. The closest I can come to a teenage girl’s voice is actually a pretty good impersonation of Mickey Mouse, and Mickey, though a talented rodent, just wasn’t right for the part.

I discovered…well, reinforced my existing knowledge of the fact…that reading out loud is the best way to find, not only typos, but awkward phrasing and clumsy sentences. Alas, much like looking up pronunciations before recording, one should really do the reading out loud and finding of said typos and awkwardnesses prior to the book being published, when there is nothing to be done about them but hope no one else noticed them…which, alas, someone, somewhere, almost certainly has.

But I also discovered, at least in this instance when years have passed between the writing of the book and my reading of it out loud, that I rather like my own stories: that I can, in fact, occasionally turn a felicitous phrase, construct an effective and exciting action scene, and craft characters to care about.

That may sound odd, but it’s actually very easy to come to the end of a book project and be more disappointed than anything else. You’ve been focusing on the flaws for so long that the flaws are pretty much all you can see, and when other people tell you the book is good, you accept the compliment with a gracious smile, but inwardly you’re thinking they’re idiots, because you know perfectly well the book is a mess and is probably the last thing you’ll ever write or get published.

Or maybe that’s just me.

At any rate, it was a pleasure to come back to an old book of mine and find that, in fact, it really is pretty good.

I enjoyed reading it out loud. I hope a few people, at least, will enjoy listening.

Although I probably can’t count on that Audible reviewer of The Other to be among them.

Permanent link to this article: https://edwardwillett.com/2013/01/on-narrating-the-audiobook-of-my-own-novel/