The science of tall trees 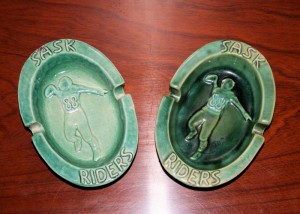 I know that sports teams have avid followings in many cities, but I doubt there are many places whose pride and interest in a team exceeds that of the fans of the Saskatchewan Roughriders. I won’t delve into it here—there are whole books about it, not to mention art exhibits—but although there are certainly people in this province who don’t cheer for the Riders or follow their fortunes (it’s fashionable among some artsy types to decry the money “wasted” by fans on the Riders, by which they mean they are as green with jealousy as the fans are with face paint: one way or the other, in Saskatchewan, you bleed green), most folks are onside.

I’m not the most rabid of fans, but I do follow the team’s fortunes, and I married into a family with terrific season tickets (row 13, home side, 50-yard line), so I’ve become a regular game-goer.

It was my wife’s grandparents who first purchased the season tickets, probably in the 1960s, and it was also they who at some point acquired these…ahem…lovely early examples of team merchandising.

One of the ashtrays bears a sticker: Ceramicana by Danesi, Toronto, Canada. So although you’d swear looking at these things that they were made by some local potter with lots of Rider Pride but not an inordinate amount of design skill, they were actually mass-produced in Toronto.

Possibly they were a Saskatchewan design which Danesi was commissioned to make. Equally possibly, and maybe more probably, Danesi made a football ashtray that any team could purchase and adorn with its name. They were clearly made in a mold, since the letters, though they look hand-applied using thin strips of clay, are identical on both ashtrays.

Danesi Art, the company that made them, has left very little of a footprint on the Internet: a few pieces of pottery show up on antiques sites and eBay, but as for the company itself, all I could find was this mention, on a site devoted to Canadian Pottery:

Danesi Arts (1937-1975), a Toronto plaster and pottery giftware manufacturer. Their ceramic items (produced from 1955) were cast from original designs created by founder Primo Danesi or commercial moulds. A Danesi copy of the Blue Mountain Pottery angelfish appeared on eBay in June and sold for $45. It’s (sic) slightly smaller size indicated that it was molded from a Blue Mountain Pottery original.

I would have guessed the ashtray dated from the 1960s or early 1970s, and this seems to support that.

From that brief description, I also gleaned a name: Primo Danesi. It’s a name that does not show up much on the Web, either, which is actually useful for this kind of research, since it means you don’t have to worry too much whether you have the right Primo Danesi or not. (Had it been the John Smith Pottery Company, it would be much harder.)

Which led me to this: on a site devoted to the experiences of Italian Canadians in the Second World War, a letter from Primo Danesi to to Ruggero Bacci. Dated February 16, 1943, it’s on stationery from the Danesi Art Manufacturing Co., eventual makers of these Rider ashtrays.

Ruggero Bacci was arrested and interned, as were many other Italian Canadians, at the start of the Second World War. Prior to his arrest, the site states, Ruggero Bacci had been working for the Florentine Lighting Company. He was arrested at his workplace along with co-workers Antonio and Pietro Danesi. “The exact relationship of the Danesi brothers to the writer of this letter is not known,” the site comments, but “The writer notes that Bacci’s son Aldo is employed by the company, and implies a strong friendship between himself and the Bacci family.”

How are you coming along now? Good I hope. Everything here is fine except the weather. It’s terrific!!! Aldo is still working for me and he is coming along real good with his painting. Aldo was telling me he thought there was hopes of your coming home. I was speaking to your wife and they are all happy with the prospects of your home coming. I really want to see you back myself, Ruggero and I’m sure lots of other people do. I guess you know how hard it is to get people for my type of work just now and I want you to know I have a job for you as soon as you’re  released. I’m in my new home now but however I won’t explain that as you’ll see it when you come out.

Finally, I found one other mention of Primo Danesi: the dedication to a book entitled Cool: The Signs and Meanings of Adolescence by Marcel Danesi (University of Toronto Press, 1994). It reads:

This book is dedicated to the memory of my late uncle, Primo Danesi. He made me understand, early in life, that the human spirit manifests itself continuously in actions that are kind and generous.

From one other brief note, I think Primo died in 1979.

Marcel Danesi, his nephew, is a professor of anthropology at the University of Toronto. Which means, if I now wanted to use this as a springboard into researching the life and work of Primo Danesi and the Danesi Art company, and eventually trace back the precise lineage of my rather ugly ashtray, I could call Marcel and go from there.

I won’t–because, you know, no one is paying me to do this, so the time I can devote to it is limited–but I remain fascinated by the endless webs of connections that surround us…and the remarkable ease with which you can at least begin to untangle those webs thanks to the greater Web into which almost all of us are now plugged.

Permanent link to this article: https://edwardwillett.com/2013/01/retro-sunday-saskatchewan-roughrider-ashtrays-and-the-italian-connection/