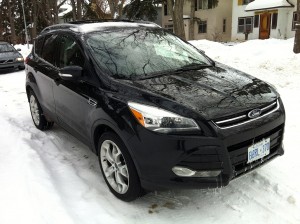 I’ve driven quite a few Fords now since I started this series of car posts, and I have to say that the Ford Escape Titanium 4WD is pretty much my favorite of the lot (always excepting the Mustang convertible, but this time of year I’d much rather be navigating our icy, snow-choked streets in the Escape than in the Mustang.) 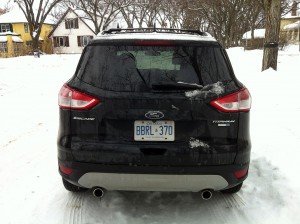 As I’ve noted before, I’m not a big-vehicle guy: I’ve found things like the Explorer (and the F150) just too humongous for my taste. This one, though an SUV, hits the sweet spot in size. I felt like I was driving a car, but a car that had the advantages of a roomy interior and a higher driver line-of-sight. It had plenty of power, so I never felt like I was struggling to get up to speed, handled well and kept me feeling secure despite the treacherous roads (thanks 4WD)…just a pleasure to drive.

Both my wife and I found the seats quite comfortable, which hasn’t always been the case with these test-drive cars (we drive a Volvo S60 normally, and we’ve never found a car with seats we like as much as those). The interior was black and silver, with leather seats, and it boasted all the amenities Ford can cram into their higher-end vehicles, including the computer-assisted parallel parking system and, of course, Microsoft Sync, which offers all kinds of voice commands and a central display screen with more options than I had time to play with. 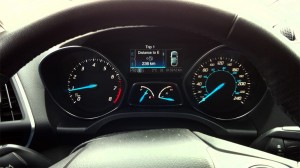 This latest version of Sync worked better than earlier versions for me, though it’s still not the intuitive Star Trek-like voice-commanded computer I’m looking for. It’s most annoying feature is reeling of the phone number for support and a website address whenever you try to guess what commands you can say and get it wrong. It took me a while to figure out you could kill the voice just by pressing the voice control button again. (Manual? I don’t read no stinkin’ manual…)

It’d probably take more than the five days I had the car to become fully conversant with everything Sync has to offer, but by the end of my time with the vehicle I was beginning to get used to it. I think over a bit more time I’d pretty much feel it was indispensable.

Like other Fords I’ve driven recently, this one featured the rear-view camera for backing up: I love that. And the collision warnings that tell you when you’re closer to something than you’d like.

And then there’s that parallel parking system. I tried it twice in front of our house, where there are both ridges of snow and icy bits. The first time, it failed: it turned the wheels sharply to park, and was betrayed by the ice–couldn’t get traction to complete the parking maneuver. But when I moved up to the next available spot, it slipped us in smooth as silk. All you have to do is follow the onscreen prompts and keep your clumsy hands off the wheel (which nets you a snarky message about parking being cancelled because of “user input.”)

It’s still one of the freakiest things I’ve ever experienced in a car. My daughter Alice would agree. She kept saysing, “Oh my gosh, oh my gosh, oh my gosh…” as the car took control and twirled the steering wheel on its own. Makes you wonder how we’ll all react to the completely self-driving cars that are on the horizon.

I didn’t get a chance to escape with the Escape onto the highway, so I can’t speak to its comforts over long distances, but based on what we experienced on the rough, rutted, snowy and icy streets of Regina, I think it’d be a pleasure to travel in.,

All in all, the Escape is a real winner, at least in the all-the-bells-and-whistles configuration of the Titanium version I drove. We’re not looking for a new car…but if we were, I’d be ready to buy after five days with the Escape. And that’s the highest praise I can offer.

P.S. I did toy with writing a short story featuring the vehicle, but I didn’t want to be accused of writing nothing more than Escape literature.

Permanent link to this article: https://edwardwillett.com/2013/01/test-drive-ford-escape-titanium-4wd/