J.R.R. Tolkien in his own words 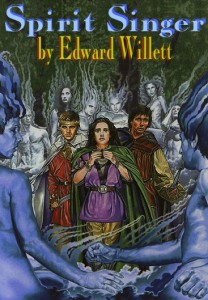 Let’s step into the wayback machine, and set it for the turn of the century…

It was in that environment that I, with my usual impeccable ability to time things badly, decided to experiment with ebook publishing.

I had a finished novel, a good one, I thought, a young adult fantasy called Spirit Singer. I had had no luck finding a publisher for it. At that point in my career, I’d had three novels published, but none by what you’d call major publishers. The Dark Unicorn and Soulworm had come out from Royal Fireworks Press, a publisher you will find on Not Recommended lists everywhere fledgling writers are warned: the only good thing that could be said about that was that both were finalists for Saskatchewan Book Awards, so at least I got a little good publicity out of them. (I certainly didn’t get any money.)

Andy Nebula: Interstellar Rock Star had come out from Roussan Publishers in Montreal, a better grade of publisher that at least paid a small advance, but then shortly thereafter went out of business, orphaning the sequel and leaving me with a couple of boxes of books but little else.

(An aside: these books do still bring in a little money every year thinks to Canada’s Public Lending Rights Commission, which pays authors for books of theirs that are found in a survey of Canadian libraries. So they weren’t a total loss…)

I had no other immediate prospects for publication, so I decided to offer Spirit Singer to one of the fledgling ebook publishers, Awe-Struck Ebooks, which also offered print-on-demand through what it called Earthling Press (not be confused with this Earthling Publications). They accepted it, and Spirit Singer came out in a variety of ebook formats (the small variety available at the time, which included a version on floppy disk…remember those?) as well as in a POD edition. (They called it “A Byte√Me Teen Fiction book”). The POD edition was adequate, but had a few formatting problems (blank pages at the end of some chapters) and, rather annoyingly, got the title itself wrong on the spine and copyright page, calling it The Spirit Singer.

I was fine with the cover art, for the simple reason I commissioned it myself, from Ronald Chirrona, and he consulted with me along the way to create something that (though badly reproduced on the cover…it’s visibly pixelated if you look at all close) I liked so much I bought the original for my office.

Spirit Singer came out…and raked in royalties in the single digits. But, once again, there was an ancillary reward: it won the Regina Book Award for the best book by a Regina author at the 2002 Saskatchewan Book  Awards, which carried with it a $1,500 prize, and thanks to that, it found its way into a few libraries, where it continues to bring in those lovely PLR dollars every February.

Along the way it also won a couple of awards for ebooks, a Dream Realm Award and an EPPIE, but the value of those awards, aside from nice trophies, was nil: nobody, so far as I can tell, bought a single copy of the book because it had won them.

Flush with the Saskatchewan Book Award success, I approached a few Saskatchewan publishers to bring the book out in a proper print edition, but got no takers.

So the book just kind of sat there, available but unloved, until a couple of years ago when everyone else, it seemed, started bringing out books in ebook and POD format themselves, independent of a publisher. I reclaimed the ebook rights (the exclusive period I agreed to give Awe-Struck having long since elapsed) and put it out myself…again, to resounding indifference.

But the publishing world continues to change. Several new small publishers have sprung up, offering a mixture of ebooks and print books (in much higher-quality POD editions than Spirit Singer’s original print form). One of them is in Edmonton: Tyche Books. Tyche put out an excellent moon-themed anthology, Ride the Moon, last year which included my reprinted short story “Je Me Souviens.” I was impressed with the quality of the book and with the publishers, whom I met in person at Calgary’s When Words Collide convention last summer. I knew they were looking for new titles and were publishing some YA…so I decided to offer them Spirit Singer. To my delight, they’ve decided to take me up on the offer, and on the last day of 2012 I signed the contract to have Spirit Singer come out in a brand-new Tyche Books edition, with new cover art, this coming spring or summer.

(Even before that, I’d taken a shot at given the book a new life by recording an audiobook version for Iambik; that should be available for sale soon.)

So Spirit Singer, which appropriately enough deals with matters of the afterlife, isn’t dead yet. I’d delighted to give the book another chance to find readers, and looking forward to working with Tyche.

I’ll keep you posted on the progress! In the meantime, though you can’t get the full version of the ebook at the moment, you can read the first two chapters here.

Permanent link to this article: https://edwardwillett.com/2013/01/the-tangled-tale-of-how-my-ya-fantasy-spirit-singer-was-born-died-and-being-resurrected/