Not enough readers, not enough time: the end of my regular science column (for real, this time)

As I noted last week when I made my excuses for not blogging very much, one of the tasks keeping me occupied was rewriting Masks, the first book in my upcoming trilogy for DAW (under the pseudonym of E.C. Blake).

This was an interesting pass through the manuscript, because its main purpose was to change the age of the central character, Mara, from thirteen to fifteen.

In addition, I completely rewrote the beginning of the book, adding quite a few new scenes from Mara’s childhood that hopefully will set up the story’s situation better and develop the character more fully in the minds of the (no doubt millions…millions!) of readers.

The “aging” process went very well: I didn’t have to change much at all except for direct references to her age. That reflects, I think, the fact that I had already written her as a bit older than thirteen: the decision to change her to fifteen was really just a recognition of that fact.

I’d made her thirteen to begin with because the book was originally conceived as a YA or even middle-grade fantasy, a much, much simpler tale than it has now become, and because I didn’t originally think of it as being one of my DAW novels: I thought it might go to a completely different publisher. But once DAW bought it, I quit thinking of it as a YA book and more as just a fantasy novel with a young protagonist. And as the story got more complex—and especially after I wrote the first draft of the second book in the trilogy, Shadows, I realized Mara really needed to be a couple of years older to make some of the situations and character interactions work. 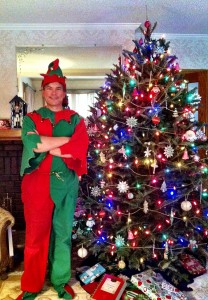 Writing the new scenes at the beginning of the book was interesting in a different way. I’m on the board of The Golden Apple Theatre (bear with me, that isn’t the complete non sequitur it appears), a new professional theatre company here in Regina which, just before Christmas, put on a fundraising evening of song and comedy called Christmas Crackers. (That’s me as an elf in the photo at left, in case you missed it last time I posted it. Not the Legolas kind of elf, alas.) One way we raised funds that evening was with a silent auction, for which I donated several novels…and the opportunity for the bidder to have his or her name used for a character in my next book.

The successful bidder was a young man named Mayson, and so as I wrote the new material for the start of Masks, I incorporated a new childhood friend of Mara’s named Mayson. (I was fortunate he had a name that didn’t need to be “fantastisized” too much. The first time I auctioned off a character-name cameo was for my Lee Arthur Chane fantasy Magebane. A fellow named Ron Ferguson won: he became Ronal Ferkisson, Lord Mayor of Elkbone.)

The thing is, the character of Mayson is interesting enough in his own right that he’s going to be back in either Shadows or the third book of the series, Faces. I don’t know exactly when or how, but he will.

Now that Masks has been sent off, revisions complete, I’ll be turning my attention to the revisions of Shadows, and then writing Faces.

Oh, and also rewriting Right to Know, my science fiction novel being published by Bundoran Press.

Oh, and writing a short book on digital careers for Rosen Publishing.

Oh, and narrating portions of a textbook for Iambik Audiobooks.

Oh, and, today only, working on a PowerPoint presentation on the history of science fiction art for the Mackenzie Art Gallery volunteers, to whom I’m speaking tomorrow.

Oh, and writing a guide to buying farm trucks for a local magazine.

Some days, I think I should just BE committed…

Except, of course, I’m too busy to go.

Permanent link to this article: https://edwardwillett.com/2013/02/aging-my-heroine-fulfilling-my-pledges/