A nice new review of Magebane…

News item about my Freedom to Read Week visit to Weyburn 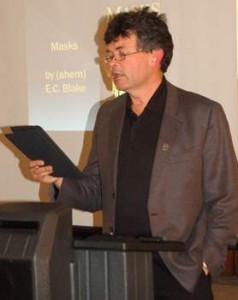 It’s not, alas, from the Weyburn Review, the newspaper I used to edit: instead it’s from Weyburn This Week. The interview was conducted before I made my appearance at the Weyburn Public Library last week for Freedom to Read Week, but didn’t appear until after…and while I appreciate the coverage, it’d have been nice to have it appear beforehand to boost the rather anemic attendance.

You can read the whole thing here, but here’s an excerpt. All I’ll say about the photo above is that I obviously should have combed my hair.

Willett spent a great deal of time at the Weyburn Public Library as a child, where he first indulged his interest in science fiction books.

“Growing up, my parents never said anything about what I chose to read, as long as I was reading,” said Willett. “I think that’s probably the best approach to take. Generally, kids are ready to read something if they are ready to read it and if they find it and they’re not ready to read it, it goes over their heads or they get bored and put it down again. Certainly, I ran into books like that, too.”

“Keeping people from reading something is just another way of trying to control ideas,” he said. “I think the last thing you want to do is to limit the free flow of ideas. I’m pretty much an absolutist when it comes to freedom of expression and the right to freely express yourself.””I think it’s very, very important that ideas flow freely if we’re going to have a democratic society,” said Willett.

Willett noted that the classic formulation of disagreeing with what one has to say, yet being willing to defend their right to say it, is how democracy is upheld.

“It gets dangerous to say, ‘they shouldn’t be allowed to say that,'” he said. “That’s when you’re getting on the slippery slope to censorship – and dictatorship, eventually.”

Permanent link to this article: https://edwardwillett.com/2013/03/news-item-about-my-freedom-to-read-week-visit-to-weyburn/