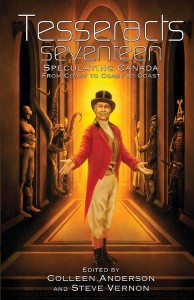 Colleen Anderson, editor with Steve Vernon of Tesseracts Seventeen: Speculating Canada from Coast to Coast to Coast (EDGE), the latest installment of the long-running Canadian anthology series, has been posting a series of interviews with the authors whose works are included in the book, and this week it’s my turn, in honor of my story The Path of Souls.

I am thrilled to finally have a story in Tesseracts, and enjoyed answering Colleen’s insightful questions.

Read the whole thing at her blog, but here are a couple of excerpts:

CA: “Path of Souls” is a beautifully rendered world, told by an outsider who makes it home. But that home is in some ways a gilded cage. What was the most important aspect of this tale for you?

For me the heart of the story is the decision by one individual to take responsibility: to do what must be done, what is the right thing to do, despite the personal consequences. That is, I think, the only definition of heroism that makes sense to me. Whether that decision makes sense to someone outside that individual’s personal mindset is another matter, of course. The actions of the main character might be seen as foolish in the extreme: she essentially throws away her previous life for many long years of service to an alien religion. But she is convinced that what she is doing is what is right, and that doing what is right is more important than her own personal wants and desires.

Over and over in my fiction I find myself returning to the theme of individual responsibility. In so much of the world, especially in the realm of politics, we pretend as if people are defined by a few simple characteristics: gender, skin color, income, place of residence. “Can such-and-such a party’s policies resonate with voters-of-a-particular-ethnic group?”, etc. But none of us are defined by the various groups into which we fall—not entirely. Each of us is an individual. We build our lives from a series of individual decisions, and while the easiest path to follow is always that most often taken by those with whom we associate, we have the power, the free will, to break from that path, to take “the road less travelled,” as Robert Frost memorably put it. And that moment, when an individual truly acts as an individual and separates him or herself from the herd, especially if that moment arises out of a powerful moral sense, is a moment that greatly interests me as a writer…

CA: Will we be seeing other tales on this particular world, or are you moving on to new worlds?

This is the only tale I’ve ever set or anticipate setting in this particular world. But I’m very fond of it, partly because it’s one of those stories whose genesis I can pinpoint with some accuracy. A few years ago, Globe Theatre here in Regina held, perhaps three years in a row, a fundraising event called Lanterns on the Lake. People bought and made paper lanterns and came down to the shores of Wascana Lake to light them and parade them. The image of that endless string of lights stretching down to the moonlit water struck a chord with me that eventually resulted in “The Paths of Souls.”

It’s also a story I’m fond of because it’s a bit of a tribute to a book I absolutely loved as a young science fiction reader: Andre Norton’s Moon of Three Rings. That idea of humans coming to a world they think they understand and falling into trouble because they don’t really understand it at all was something I wanted to use, and I also wanted to capture the deep sense of strangeness and wonder Norton’s book woke in me when I was 12 or so. I think maybe I manage it, at least a little.

Permanent link to this article: https://edwardwillett.com/2013/11/an-interview-with-me-in-honor-of-my-story-in-tesseracts-17/