Week 4 of the Great Book Giveaway of 2014: enter and get a free copy of The Chosen 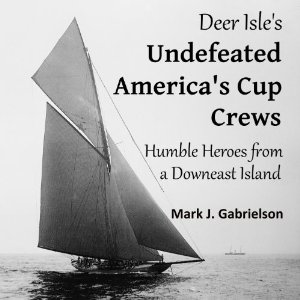 Deer Isle’s Undefeated America’s Cup Crews: Humble Heroes from a Downeast Island, by Mark J. Gabrielson, (published by New Street Communications) is a fascinating look at a crucial segment of the long history of America’s Cup yacht racing. I was fortunate enough to be hired as the narrator for the audiobook version, and enjoyed it immensely. (I may have lived my entire life about as far from the ocean as you can get, but I was infected early in life with a fascination for sailing by reading the Swallows and Amazons series by Arthur Ransome,.)

The audiobook is now available from Audible, so please, go forth and purchase.

In 1895, emissaries from the New York Yacht Club traveled to Deer Isle, Maine, to recruit the nation’s best sailors, an “All American” crew. This remote island in Penobscot Bay sent nearly 30 of its fishing men to sail Defender, and under skipper Hank Haff, they beat their opponents in a difficult and controversial series.

To the delight of the American public, the charismatic Sir Thomas Lipton sent a surprise challenge in 1899. The New York Yacht Club knew where to turn and again recruited Deer Isle’s fisherman sailors. Undefeated in two defense campaigns, they are still considered one of the best American sail-racing teams ever assembled. Listen to their fascinating story and relive their adventure.

Listen to a sample!

Permanent link to this article: https://edwardwillett.com/2014/03/nautical-audiobook-i-narrated-now-on-sale/