Week 7 of the Great Book Giveaway: enter and get another free short story!

The Daily Toast: To Our Guest

The Daily Toast: a new daily feature (until I run out) 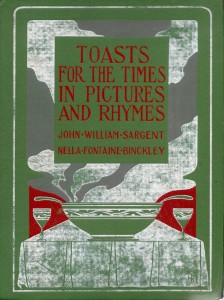 While tidying up my office bookshelves today–four boxes of books going out!–I came across an amusing volume from the collection of my wife’s grandparents (the house has been in the family since 1939).

Toasts for the Times in Pictures and Rhymes, by John William Sargent, illustrated by Nella Fontaine Binckley, is exactly what it sounds like: an illustrated toast book. Originally published in paperback in 1904 by The Consolidated Retail Booksellers, our little hardcover was published in 1906 by The Saalfield Publishing Co.

For the next few days, I’m going to offer a Toast of the Day from this little book. Just because I can! 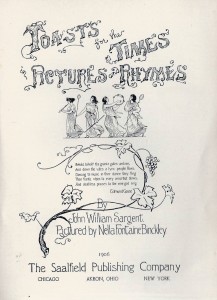 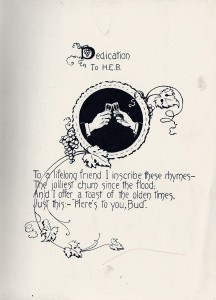 But first, some background, which I obtained (Google being the fabulous thing it is) via the blog of the Goodwood Museum & Gardens in Tallahassee, Florida.

According to the museum:

John William Sargent was born in Bangor, Maine, in 1852.  A performer of magical feats since he was a boy, he founded the Society of American Magicians and served as the second president.  For the last three years of his life (1917-1920), he served as the private secretary of Harry Houdini.  His only other book was another book of humorous toasts (also illustrated by Nella Fontaine Binckley), published in 1906, Smoke and Bubbles.
Nella Fontaine Binckley was born in Washington, D.C., in 1877.  She was a pupil of the great impressionist painter, William Merritt Chase, studying also at the California School of Design and The Mark Hopkins Institute.   She was active in the Washington, D.C., art scene and illustrated several other books, including The Liberators:  A Story of Future American Politics by Isaac Newton Stevens in 1908, The Other Mr. Barclay, by Henry Irving Dodge in 1906, and Scars on the Southern Seas:  A Romance by George Bronson-Howard in 1907.

Their other book, Smoke and Bubbles, shows up a lot more online than Toasts for the Times, but I also turned up this book review from page 7 of the Brooklyn Daily Eagle of December 5, 1904:

A NEW TOAST BOOK. Wit and humor, cynicism and philosophy, art and poetry alternate and unite between the covers of “Toasts for the Times in Pictures and Rhymes,” by John William Sargent, pictured by Nella Fontaine Binckley (Consolidated Retail Booksellers, $1 net.). The little volume’s paper cover claims for it the distinction of being “the only toast book published in which every toast is illustrated.” The publisher might have said “well illustrated,” for although pictured toast books are not rare it is not always that the illustrations they contain are as original and attractive as in the present volume. Sometimes they are even more symmetrical than the verselets that gave them their “raison d’etre.” But, if not always well balanced, the rhymes are never less than clever and in their disregard for conventionalities are much akin to the Bohemian folk whose gayer hours have been their source of inspiration. This happy-go-lucky unconventionality of rhyme and reason is well presented in the toast to Bohemia: “To Bohcmia, where no questions are asked, Where today is today, and no man has a past; Where ethics, and usage, and trifles like that Are cast to tho minds, and each man stands pat; Where abideth true faith which casteth out fear, And a man is a monarch on pretzels and beer.” The new toast book ought to be a good seller.

Above, you see the cover and the title page and the dedication. And here is today’s Daily Toast: 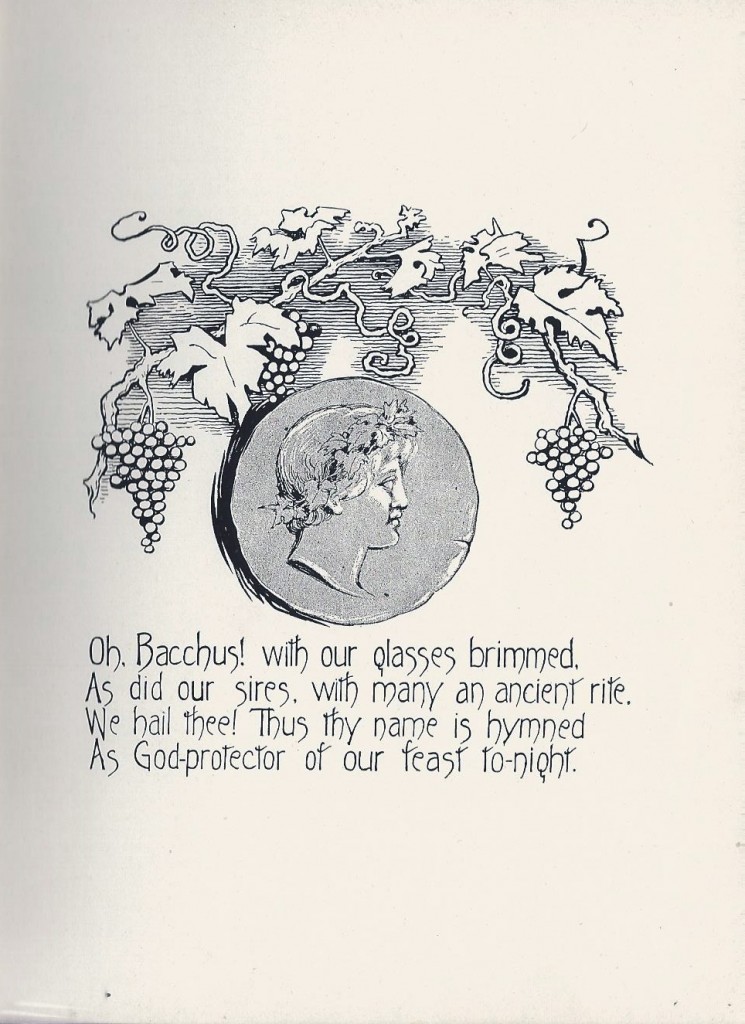 Permanent link to this article: https://edwardwillett.com/2014/03/the-daily-toast-a-new-daily-feature-until-i-run-out/