The Daily Toast: To the Pessimist

The Daily Toast: To Sobriety

My review of Globe Theatre’s “Man of La Mancha”: it’s a moving exploration of the power, necessity and limitations of storytelling 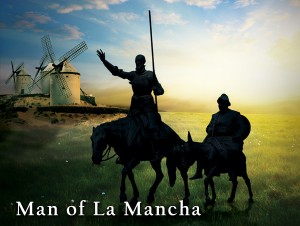 This review also appears at Regina Reviews, which I edit.

Globe Theatre’s production of Man of La Mancha is a beautifully directed, acted, and sung exploration of the power, necessity and limitations of the one trait that truly makes us human: our ability to imbue the world with meaning through the telling of stories.

Imprisoned in 15th-century Spain for the crime of, in his reluctant needs-must capacity as a tax-collector, foreclosing on a church (but really for the far more serious crime of believing that the laws should apply equally to everyone), Miguel de Cervantes (David Ludwig) and his manservant (Eddie Glen) must face the dreaded Inquisition—but first, they are put on trial by their fellow prisoners, led by the Governor (Russell Roberts).

Threatened with the loss of all his possessions, and in particular, and most alarmingly, by the destruction of the precious manuscript for his new book, Cervantes proposes to use the trunk of theatrical properties tossed into the cell along with him to outfit the prisoners to play roles in a dramatization of the story told in the manuscript: the story of Alonso Quixano, a rather ordinary gentleman whose head is filled with tales and who has become disenchanted with the sorry state of the world. Driven mad by his own imagination, he sets out on a quest to rid the world of evil, taking on the persona of the great knight Don Quixote, accompanied by his faithful manservant/squire, Sancho.

The musical becomes primarily a play within a play, with Cervantes becoming Quixote, his manservant becoming Sancho, and the rest of the prisoners playing the other characters in the tale. But every now and then real-life intrudes, as the prisoners take issue with the play—or more threateningly, the Inquisitors, with whom Cervantes has a very real and looming date, make their presence felt.

In the play within the play, Quixote sets out, tilts against a windmill he believes is a giant, transformed by his arch-nemesis, the Enchanter, and then travels to an inn which he perceives as a castle, his hope being to be properly dubbed as a knight by the lord therein—in reality merely the innkeeper (Roberts).

It is also there that he meets Aldonza (Shelley Simester), a lowly scullery maid and prostitute whom he immediately hails as his Dulcinea, fairest and purist lady in the land, and a group of lewd crude mule-drivers, whom he perceives as fellow knights.

As the tensions between Quixote’s fantastical delusions and sordid reality stretch to the breaking point at the inn, Quixote’s family plots to rescue him from his madness—entirely for his own good, of course.

The inspired set design by Doug Paraschuk encloses both stage and actors (when you first enter the theatre) within a prison cage. The cage is lifted early on, but it hangs above the stage throughout the performance, reminding us of where the action is really taking place—and perhaps implying that the real world is its own sort of cage from which only madness or stories can set us free.

Costumes, designed by Bonnie Deakin, are note-perfect, mostly in muted Earth tones or black until the appearance of the Moors who rob Quixote and Sancho, when we get vibrant pinks and blues and a belly-dancer to boot,

Max Reimer’s direction is solid (but definitely not stolid!), and he knows exactly how to work in the round, which is not how Man of La Mancha is usually staged (very few musicals are normally staged in the round, and yet Globe always finds a way to make it work). I was particularly struck during the sequence with Quixote’s family in which the set becomes a chessboard (thanks to a bit of clever lighting by designer Wendy Greenwood). The priest (Geoffrey Whynott) labels each of the family members a chess piece—he, the bishop; Dr. Carrasco (Stephen Sparks) apparently the king; the housekeeper (Dawn Bergrstrom) the castle, and Quixote’s niece (Kaitlyn Semple) the queen, all discussing the business of Quixote, the knight. In the ensuing scene, each of the characters moves on the board precisely as actual chesspieces move—the bishop “charmingly diagonally,” the king one square at a time in any direction, the queen as many squares as she wants in any direction, the castle only horizontally or vertically. It showcases Reimer’s attention to detail and his determination to draw everything possible from the text.

All of the performances are top-notch. Ludwig is utterly believable as both Cervantes and Quixote, and there’s no question that the musical highlight is his singing of “The Impossible Dream” near the end of Act 1—the one song everyone knows from Man of La Mancha, and one which he nonetheless manages to imbue with fresh meaning because he sings it perfectly from within the character he has created.

Glen is funny and down-to-Earth as Sancho, Roberts alternates easily between the grim and imposing Governor and the easygoing innkeeper, and everyone else not yet mentioned—Gaelan Beatty, Dawn Bergstrom, Stephenos Christou, Jeff Gladstone, Benjamin Redant and Kaitlyn Semple—transition smoothly among their varied roles and display excellent skills as actors, singers, stagehands (always a necessity in Globe casts) and, in the case of Redant and Semple, musicians: both—though primarily Semple—played bass in the excellent ensemble led by music director Stephen Woodjetts and including Keiran Semple.

Still, the standout for me is undoubtedly Simester, who absolutely nails what is in some ways the central role, Aldonza. Hard as nails, cynical, disillusioned and bitter, she’s a very tough woman in a very difficult place—and yet the love “pure and chaste from afar” that Quixote offers for his “Dulcinea,” delusional though it seems, manages to penetrate her shell and touch her heart. The consequences are dire when, influenced by Quixote’s belief in chivalry, she attempts to minister to the wounds of the mule-drivers after they are comically defeated in a confrontation with Quixote, Sancho and Aldonza…and yet, in the end, she embraces the better version of herself that Quixote crafted in his imagination. She has been transformed by his belief: transformed, really, by the story he tells of the world, the fictional narrative he has imposed on harsh reality.

And therein lies, for me, the beating heart of this wonderfully written play (and it’s interesting that in the writer, Dale Wasserman, is credited first, above the composer, Mitch Leigh, and the lyricist, Joe Darion–it’s more typical in musical credits to list the composer and lyricist first, with the writer of the book playing second fiddle, and the order of credits clearly reflects the primacy of the script over the music, wonderful though it is, in this musical play).

Of course, I’m a novelist—and specifically a writer of the fantastic—and so it’s perhaps not surprising that what really struck me in Man of La Mancha was what it had to say about the power of storytelling.

Begin with the playwright. Wasserman is telling us a story. It begins with a storyteller…who then tells, through the medium of his fellow prisoners and makeshift thespians, a story within the story…a story about a man who is telling himself, and those around him, yet another story: his own iconoclastic version of the world.

Quixote’s story touches Abodanza, and makes her perceive the possibility of a better world, a world that, while perhaps as unreachable as the stars, transcends grimy reality and offers hope. Cervantes’s story touches the prisoners, who return to him his precious manuscript. And Wasserman’s story—with the help of Leigh’s music and Darion’s lyrics—touches the audience, making us, too, believe in the power and necessity of idealism.

There are some who feel art must, like Quixote’s dread enemy the Enchanter when at last the two come face to face, hold up a mirror to reality, forcing us to face the unpleasantness and nastiness and (as those artists see it) ultimate futility of the world in which we live. But Man of La Mancha argues that what art really does is illuminate reality, so that we can see, not only what is hiding in the shadows, but the beauty and wonder that the world also contains…or at elast can contain, if we make it so.

Maybe it is “an impossible dream”…but it’s a dream worth striving for. The world is what it is, but it is also what we perceive it to be. More importantly, it is what we make it. And if we strive to impose upon it a narrative that makes it better, though we may fail a thousand times, still we can pick ourselves up and continue our quest.

Whether we succeed or fail, the attempt alone is worth the effort.

Permanent link to this article: https://edwardwillett.com/2014/04/my-review-of-globe-theatres-man-of-la-mancha-its-a-moving-exploration-of-the-power-necessity-and-limitations-of-storytelling/