One Song of the Sword signing down, two to go 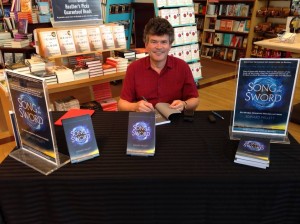 I had a great signing of Song of the Sword Chapters Regina on Saturday–lots of people stopped to talk, and sold about a dozen books over the three hours, which is pretty good for these sorts of things.

Next Saturday, June 28, I’ll be in Saskatoon, reading and signing at McNally Robinson at 1 p.m., then moving over to Indigo for 4 to 6 p.m.

Hope to see you there!

Permanent link to this article: https://edwardwillett.com/2014/06/one-song-of-the-sword-signing-down-two-to-go/