Cover art revealed for The Cave Beneath the Sea

My latest book: The Adventures of Michael & Mia: Stewards of the Land 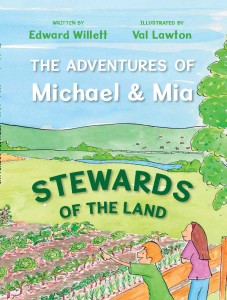 This is a bit different from my usual work. Not an alien, spaceship, monster or magic-user to be found!

A while back I was contacted by Agriculture in the Classroom Saskatchewan about writing a short illustrated book to be used in classrooms during Agriculture Literacy Week. Each year during this week, AITC has agricultural producers and others from the agriculture industry to visit school classrooms around the country to read and talk about their own experiences.

I had great fun writing what became The Adventures of Michael & Mia: Stewards of the Land, which is being featured during this week. It’s a short story about two kids who try to get an old garden whipped back into shape on the farm their parents have just bought. The things they struggle with–what to plant, when to plant it, irrigation, protecting the soil, fertilizing, dealing with pests–mirror what their parents and other farmers have to think about while growing crops.

The book is illustrated by Val Lawton. I’m looking forward to launching it tomorrow, March 2, at Seven Stones School here in Regina, where I’ll be one of the Agriculture Literacy Week readers.

The book gets mentioned in the press release from the Government of Saskatchewan proclaiming Agriculture Literacy Week, and there’s also a good description of it in this interview with Karen Carle, ag education consultant with Alberta Agriculture.

The book has been translated into French, and I’m told more than 30,000 copies have been ordered across the country, making it probably the the bestselling book of my career. Go figure.

To get your very own copy, contact AITC Saskatchewan.

Permanent link to this article: https://edwardwillett.com/2015/03/my-latest-book-the-adventures-of-michael-mia-stewards-of-the-land/