Read the first chapter of Lake in the Clouds! 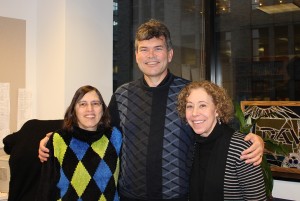 From left to right, Sheila Gilbert, me, and Betsy Wollheim.

I’m jumping the gun a little bit here, since Freelance hasn’t come out yet, but here’s my upcoming “Space-Time Continuum” column for the Saskatchewan Writers Guild magazine–an interview with my editor and publisher, Sheila Gilbert, nominated once again this year for a Hugo Award for Best Editor, Long Form.

As a teenager looking for science fiction and fantasy, I was drawn to the distinctive yellow spines of paperbacks published by DAW Books—a name I found amusing because DAW are the initials of my brother, Dwight Arthur Willett.

In fact, those initials belonged to Donald A. Wollheim, who founded the press in 1971 with his wife, Elsie. Today, the company is co-owned and operated by their daughter, Elizabeth (“Betsy”) Wollheim, and Sheila Gilbert. Together they select, edit, and publish all the books under the DAW imprint, including work by award-winning authors, bestselling authors…and me.

Sheila Gilbert, then, is both my editor and publisher—and a handy person to interview to give you a little insight into the world of a major SF and fantasy publisher.

Sheila read science fiction and fantasy in her teens and attended conventions, which is how she became friends with the Wollheim family. Fresh out of university, with a B.A. in English, she was offered a job as an editorial assistant to Don Wollheim, who in those days edited Ace Books.

“I jumped at it,” Sheila says. “People were going to pay me to read the books I would read anyway! It was the ideal job and I never looked back.”

In 1972 she moved to New American Library as an ad and cover copywriter, becoming editor of NAL’s Signet science fiction line in 1978. In 1985, when Don Wollheim became critically ill, Betsy Wollheim asked Sheila to join her at DAW. The two have run the company ever since.

DAW is attractive to new writers because it is one of the few major publishers that still accepts unsolicited submissions. The odds are long—hundreds of manuscripts arrive in any given month—but, says Sheila, “We’ve found some of our best authors through manuscripts that are unsolicited. Which isn’t to say that we haven’t also gotten things through agents, but it doesn’t mean that you have to have an agent to sell a book. You just have to be a really good writer.”

In her 45 years in the business, Sheila has read a lot of manuscripts. But one thing never changes: “Every time you find one that is good and you can actually be excited about it, it’s certainly a thrill.”

Although you can submit a complete manuscript (by mail, not email, unless you’ve been asked to send it by email), Sheila actually recommends sending a query letter first—not an email, because of spam filters. “Make it very simple. If you can, have a one-line kind of hook to hopefully catch attention, and then a synopsis. We don’t need a testimonial how your mother and all of your relatives loved it.” Along with the synopsis, send the first three or four chapters. If the partial submission is interesting enough, DAW might ask to see the complete manuscript. (For DAW’s formal submission requirements, see www.dawbooks.com.)

What kind of books does DAW publish? “We’re really open to the whole spectrum, from epic fantasy to urban fantasy to military SF to cultural or high-tech SF—pretty much anything where there are strong ideas, really well-developed characters, and good writing.”

She urges writers seeking to be published by DAW (or anyone else) to write every day, even if they end up throwing most of it out. “If you write every day, 200 words every day, before you know it, you’ll have a book,” she says. “If you sit down and write occasionally that’s not nearly as likely. If you find a writers’ group that can give you good input, that’s valuable. But you have to have something to work with.”

Once a book is accepted, the editor steps up. Editors, Sheila says, “provide an objective perspective. A good editor will see the holes in your manuscript, the things that don’t make sense and are missing. They can help you improve your plots and your characters, make the book that you’re writing the best it can possibly be. But it’s a collaborative effort, and I think that’s the most important thing. They shouldn’t just be telling you what to do, they should be helping you find the right path.”

Sheila doesn’t think traditional publishing is going away, even though it’s never been easier to self-publish. “A lot of people think they can self-publish, which some people can do and do well. But other writers need more input than that, need an editorial hand, need someone who understands marketing and can bring to that everything publishers can offer.”

Ebooks are an increasingly important part of the book market. “They don’t have the heavy associated costs of the print editions, so they really subsidize print sales,” Sheila says. But their success depends large on the author’s online presence. “It’s the biggest promotional tool that authors have these days. It gives readers a personal stake. They feel like they know the author and they’re friends.”

“It’s one of the areas where you can give your imagination free rein, which is not true of other fields,” she says. “What could be more fun than creating a whole universe?”

Permanent link to this article: https://edwardwillett.com/2015/04/giving-imagination-free-rein-sheila-gilbert-of-daw-books/