Seven-sentence stories from Creating in the Qu’appelle 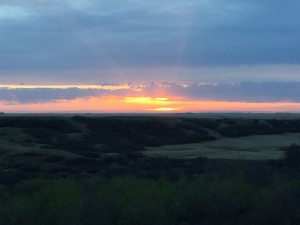 I had the great pleasure last Tuesday, Wednesday, and Thursday to be one of the writer-instructors at Creating in the Qu’appelle, an annual teen writing camp held at Dallas Valley Ranch Camp outside Regina. (The others were Chris Fisher, Gerald Hill, and Steven Galloway.)

Over the course of the 2 1/2 days, I conducted four workshops, three for students and three for teachers, and had one-on-one meetings with several promising young writers. There as also a very enjoyable open-mic night where the teens read from their work, I sang “Me” from Beauty and the Beast (because, why not?), and the talented duo AndersonBurko performed.

For my workshop, I used the Seven-Sentence Short Story exercise that I lifted from James van Pelt a while ago. To recap, it works like this:

1. Introduce what the main character wants and the first action he/she takes to accomplish that goal.

2. The results of the action the charact takes in sentence #1 has to make the situation worse. The character should be farther from the goal now.

3. Based on the new situation, the character takes a second action to accomplish the goal.

4. The results of the second action the character takes from sentence #3 is to make the situation worse. The character should be even farther from the goal now.

5. Based on the new situation, the character takes a third and final action to accomplish the goal.

6. The third action either accomplishes the character’s goal, fails to accomplish the goal, or there is an unusual but oddly satisfying different result of the last action.

I don’t always take part in the exercise myself, but this time I did. And so, gentle reader, I present you with two seven-sentence short stories. Be kind.

1. Prestal looked down from the branches of the giant oak into the dim green shadows where the great stag hesitated, clenched his knife more tightly between his teeth, and leaped.

2. He intended to land on the stag’s back and seize its antlers, to ride it to exhaustion and then kill it with the dagger…but the moment he moved he startled a flock of starlings which exploded from the tree with a noise like a hailstorm on a tile roof, and the stag bolted too, so that rather than land on it shoulders, Prestal landed on its hindquarters, and promptly tumbled to the ground, getting kicked in the stomach by the fleeing stag’s rightmost hoof on the way.

3. But he wasn’t done yet: he spat the now useless dagger from his mouth and reached instead for the crossbow slung across his back; killing the stag with a crossbow bolt might not impress his fair lady Silena as much as the riding-it-and-stabbing-it scenario he’d originally envisioned, but ultimately, the real goal was not letting dinner get away.

4. He aimed, fired, and missed…well, missed the stag: he did hit the black mountain cat which had just leaped from the branches on the far side of the giant oak and born the stag to the ground, the bolt skittering across its haunches so that it yowled in pain and fury—and then turned and leaped toward him, murder in its yellow eyes.

5. Prestal had one chance, and one chance only: he snatched up the fallen dagger, held it out at arm’s length, and waited for the impact.

6. But the impact never came—the beast leaped high over his outstretched arm, landed behind him, skidded to a halt, and made a sound that the panicked Prestal first interpreted as a growl, until his terror subsided a little: then he recognized it as a purr.

7. He twisted around just in time to see the cat transform from cat to beautiful lady—his lady, Lady Silena, who smiled and said, as she helped him to his feet, “As I warned you when we first met…sometimes, I can be a bit catty.”

Story 2: A Lesson in Humility

1. Anton dove headfirst into the crystal-clear water of the Pool of Light, determined that this time he would reach the bottom and retrieve the precious Stone of Foreseeing that Sage Chamis, his mentor, had demanded he come back with…or not come back at all.

2. But the moment he touched the water, it changed in consistency from liquid to something more like thick jelly: he barely penetrate it, and in the same instance it changed from crystal-clear to inky black, black as scrivener’s ink.

3. Anton swore, but he wouldn’t—couldn’t—give up: he drew the dagger from his belt and sliced at the jelly-like substance of the pool, digging his way foot by foot toward the hidden bottom, and the Stone it held.

4. The Pool didn’t seem to like that: the whole thing heaved, like a dog that had eaten bad pork, and threw Anton out onto the glittering, jewel-like sand surrounding it.

5. He scrambled to his feet and, in fury and frustration, thrust out his fingers and screamed the activating words for the Spell of Flaming Death.

6. The magical fire tore into the pool’s black contents, causing them to bubble and smoke, filling the cavern with a thick haze that made Anton cough and blinded him for several minutes: when it cleared, there was the pool, crystal-clear again, the Stone of Foreseeing still winking away in its depths, as though mocking him.

7. ”Seeing is not the same as having, and sometimes the best way to your goal is not the direct path,” a voice said behind him, and he turned to see Sage Chamis, who walked over to a rope lying at the side of the pool he had noticed but ignored, tugged on it, and pulled the stone to him, only to untie it and toss it back into the pool: “Let us continue our lessons,” he said, and Anton, sighing, followed him out of the cavern.

All in all, Creating in the Qu’appelle was a great experience. I hope I have the chance to go back some day!

Permanent link to this article: https://edwardwillett.com/2015/05/seven-sentence-stories-from-creating-in-the-quappelle/