CanLit for Little Canadians likes Cave Beneath the Sea 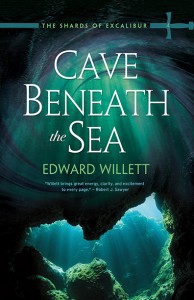 Helen Kubiw at the excellent CanLit for Little Canadians site has been a fan of The Shards of Excalibur from the beginning, and she likes Cave Beneath the Sea quite a lot:

In Cave Beneath the Sea, Edward Willett has created as exciting a read as the earlier books in the series, continuing to develop his characters and their relationships while the action-filled plot carries the reader to intriguing national and international locales.  Both Ariane and Wally feel the power of the sword, drawing them to its shards but also compelling their anger in those who have hurt them: parents, siblings, bullies, enemies. And while they struggle with those yearnings, they are finding their way to a hitherto-unknown girlfriend-boyfriend relationship that provides them the family they both crave.  It’s hard for me to decide which is the stronger foundation for the story, the characters or the plot, as both are substantial and intricate.  Regardless, Cave Beneath the Sea takes The Shards of Excalibur a fast-moving step closer to the Door to Faerie, the magical entity and Book 5 in the series.

Permanent link to this article: https://edwardwillett.com/2016/05/canlit-for-little-canadians-likes-cave-beneath-the-sea/