CanLit for Little Canadians likes Cave Beneath the Sea

How to write YA fantasy: more story, less pretentiousness 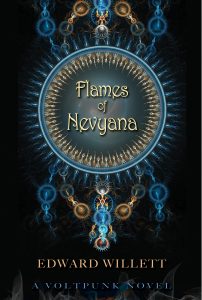 My next published novel will be Flames of Nevyana, a young adult fantasy published by Rebelight Publishing in Winnipeg, and here’s the cover art.

Flames of Nevyana began life as Blue Fire, and was the last novel (for the moment) I’ve written “on spec”: that is, I wrote the whole thing and then tried to sell it. It’s been rewritten a lot since that first draft and is much stronger for it. I’m excited for readers to have a chance to discover it.

Release date will be sometime this summer: I’m hoping it will work out to do a book launch of some sort in Winnipeg in mid-July, when I’ll be there anyway on a family trip. I’ll keep you posted.

Permanent link to this article: https://edwardwillett.com/2016/06/cover-art-reveal-flames-of-nevyana/