Flames of Nevyana “an awesome and fun book”

A long interview with me from Books Chatter

The Flames of Nevyana blog tour continued today with this long interview at Books Chatter. I had fun answering these questions.

A very warm welcome to Edward Willett (a.k.a. E.C. Blake); thank you for joining us on BooksChatter! What was the inspiration for Flames of Nevyana?

“I was driving from my home town of Regina, Saskatchewan, to Meadow Lake, about 500 kilometres further north, to do a reading at the library. Whenever I’m on my own in the car on a long trip I do a lot of thinking about writing, and on this occasion I deliberately set myself the task of coming up with a new idea for a YA fantasy novel.

I got to thinking about Arthur C. Clarke’s famous dictum that “Any sufficiently advanced technology is indistinguishable from magic,” and that led me to think that our mastery of electricity would certainly seem like magic to someone from the Middle Ages. From there it was a short leap to the idea of a magic system based on electricity. In my book, Blue Fire is still magic, and is controlled through magical means, but it’s clearly electricity, too.

With that idea in mind, I began my usual process of asking myself questions about the world: how would Blue Fire be used? How did the people learn to harness it? Who might be harmed or benefit from it? By the time I got to Meadow Lake, I had the broad outlines of the story sketched out in my head. I think I even talked about it in my presentation that night.”

How much of yourself is reflected in this book, and how?

“I figure I’m reflected in all my books. I can’t help but be. The only person I really know is myself, and so all my characters are, in some way, a piece of myself. Even the ones who appear to have nothing in common with me at all (and one of the characters in Flames of Nevyana is a bipedal feline) are still constructed using my own sense of how human beings think.”

A bipedal feline… uhm… that sounds like a dangerous thing… I hope he doesn’t also have opposable thumbs! 😉

The first thing that draws me to a book is its cover. Can you tell us about your cover for Flames of Nevyana – why you chose that concept and who the artist is.

“I love the cover, but I didn’t have anything to do with it. My publisher, Rebelight, chose the artist and presumably suggested what the cover should look like.

That said, I like the intricate suggestion of gears within gears, the kind of fractal nature of the image, that sense that tiny changes can have major implications. That ties in well with the plot. The somewhat mechanical nature of the image also ties in with the magic system. Blue Fire, the central magic of the story, is essentially electricity, even if its produced and controlled through magical means, and I think the cover captures that.”

Why should we read Flames of Nevyana and what sets it apart from the rest? What makes your book unique?

“Rebelight is calling this a “voltpunk” novel, because the magic is based on electricity. That makes it unique, because as far as I know, that term hasn’t been used before.

As for why you should read this book? Because it’s a great story, full of adventure and magic and even romance. Because it has three unique young people who are each complex and quirky and must learn how to work together despite all the aspects of their society that are trying to drive them apart. Because the world and the magic system are both unique. And because you’ll have a wonderful time reading it.”

Can you tell us something quirky about Flames of Nevyana, its story and characters?

“The main reason that the Nightdwellers are bipedal felines is that I love cats. My science fiction novel Terra Insegura (DAW Books) has a race of genetically modified humans, the Kimonomimi, who are also essentially bipedal cats. One of the first short stories I ever wrote had an alien in it who is feline in nature. I’m always happy when I can work anything cat-related into a story. I wish reincarnation were real so I could come back as a cat.

As I write this, my cat (Shadowpaw, a black Siberian) is stretched out on a chair in the living room looking adorable. I think I’d better go rub his tummy.” 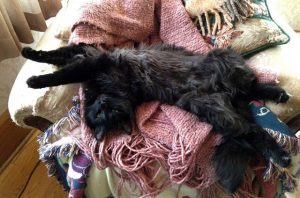 Awww! Yes, you better! (we kind of are rather partial to cats as well… we currently have seven little monsters…)

Hello Shadowpaw! Lots of head scratches from us as well 😀

Who would you recommend Flames of Nevyana to and what should readers be aware of (any warnings or disclaimers)?

“I’d recommend Flames of Nevyana to anyone who loves action-and-magic-filled young adult fantasy: readers, say, 12 and above. Adults will enjoy it, too.”

If you could / wished to turn Flames of Nevyana into a movie, who would be your dream team?

“I’d give it to the Duffer Brothers, who created Stranger Things, and Millie Bobby Brown, who played Eleven in that series, could play Amlinn (in a year or two).

It should be filmed in a valley in the Canadian Rockies.

Music by John Williams. Petra could be played by Asa Butterfield. Jin would probably be computer-generated.”

“I’m the award-winning author of more than 50 books of fantasy, science fiction, and non-fiction for all readers, so I write a lot of different stuff.

My first short story, written when I was 11, was called “Kastra Glazz: Hypership Test Pilot.” I wrote two fantasy novels and one adventure novel in high school. My first published novel (Soulworm) was modern-day fantasy, while my second (The Dark Unicorn) was a more traditional medieval-world fantasy.

But then I turned to science fiction with Andy Nebula: Interstellar Rock Star. Then it was back to fantasy (Spirit Singer), followed by three science fiction novels for my New York publisher, DAW Books (Lost in Translation, Marseguro—which won the 2009 Aurora Award for best Canadian science fiction novel in English—and Terra Insegura, short-listed for the same award the following year).

I switched to fantasy for DAW with Magebane (written as Lee Arthur Chane), and then my just-completed trilogy The Masks of Aygrima, Masks, Shadows, and Faces (written as E.C. Blake).

My other big project recently has been a just-completed five-book young adult fantasy series called The Shards of Excalibur (Song of the Sword, Twist of the Blade, Lake in the Clouds, Cave Beneath the Sea, Door into Faerie), about a modern-day teenage girl, Ariane, who discovers she’s heir to the power of the Lady of the Lake, and must find the scattered pieces of Arthur’s legendary sword (with the help of her friend, Wally), before Merlin can—Merlin is disguised in our modern age as a Steve Jobs, Bill Gates-style computer magnate. That series was published by the respected Canadian literary publisher Coteau Books.

So I guess you could say my first choice of genres is always either science fiction or fantasy, but I go back and forth between the two with regularity. And, yep, that’s what I love to read, too. I don’t think you CAN write science fiction and fantasy without reading them voraciously.”

What is your writing process?

“I get the idea, craft a fairly detailed synopsis, and then tend to leave that behind pretty quickly once I’m actually writing, as one paragraph flows into the next and characters begin asserting themselves. I often find myself having to completely replot halfway through the book since the original synopsis no longer works.

I write fast, when things are going well. I wrote Door Into Faerie, the fifth book in The Shards of Excalibur series, in 2 ½ weeks—it’s 60,000 words. I wrote Shadows, Book 2 in The Masks of Aygrima trilogy, in a month—that’s 105,000 words. Of course, there’s a lot of revision after that, first my own polishing, and then the revisions suggested/required by my editor. But first drafts pop out pretty fast.

I tend to write out of my home office, in a coffee shop or (ahem) bar. Sometimes the background noise can be too distracting and I have to put on headphones to block it out, but a general hubbub of voices doesn’t bother me, and I find there are fewer distractions when I’m out of my office than when I’m in it.”

What is in store next?

“My next non-fiction book to appear will be Government House, Regina, Saskatchewan: An Illustrated History, which is just what it sounds like.

My next novel will be The Cityborn, my eighth for DAW Books in New York. It’s a science fiction novel set in a strange, hierarchical city that straddles a canyon choked with the garbage dumped from the city over centuries. A girl from the very top of city finds herself thrown into the underworld of the garbage heap, and with a young man who has grown up there must uncover the strange, terrifying secrets that connect and threaten them.

After that, I’ll be writing the first book in the Worldshapers fantasy series, an open-ended series for DAW. They’ve bought the first two books but I hope there’ll be many more. I also hope to have an illustrated poetry book out in the not-too distant future, and there are a few things I’m looking at self-publishing. Never a dull moment!

Right now, there are no plans to write a sequel to Flames of Nevyana, which is pretty self-contained…but you never know.”

And as a final quirky thing, to get to know you a little bit better… do you have a pet or something that is special to you that you could share with us? 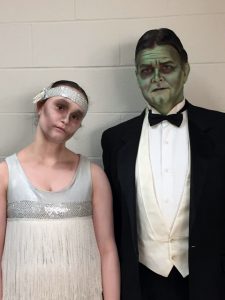 “Something special to me? That would definitely be my daughter, Alice.

In addition to writing, I also perform—I’m an actor and singer, sometimes just for fun, sometimes professionally. Last spring Alice and I had the chance to be in a show together: Regina Lyric Musical Theatre’s production of The Addams Family Musical. I played Lurch and she played one of the Addams ancestors. Which explains the photo! :-)”

Permanent link to this article: https://edwardwillett.com/2016/10/a-long-interview-with-me-from-books-chatter/