Great review for The Cityborn from RT Book Reviews

Having just posted my column from the February/March 2017 issue of Freelance, the magazine of the Saskatchewan Writers Guild (see previous post), it behooves me to be more timely and post the most recent column, from the April/May issue. And here it is! 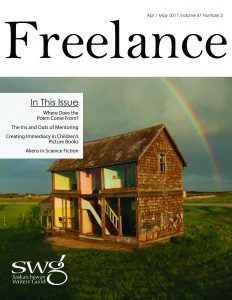 I remember being confused, as a kid, the first time I encountered the term “illegal aliens.” “Alien,” to me, had only one meaning: intelligent creatures from other planets. How could they be illegal? I wondered. Not being from this planet, were they really subject to its laws?

Aliens are one of the great tropes of science fiction, as the length of the article in the Science Fiction Encylopedia makes clear—it’s some 17,000 words long. The first complete short story I wrote, “Kastra Glazz: Hypership Test Pilot,” at age 11, featured aliens—the title character landed on a planet inhabited by intelligent but not-very-friendly extraterrestrials from whose tentacles he had to escape.

You might think (as I once did) that the idea of intelligent lifeforms on other worlds was an invention of H.G. Wells, author of the seminal alien-invasion novel The War of the Worlds (1898), but as the aforementioned encylopedia article makes clear, the concept goes all the way back to antiquity.

The Pythagoreans, for example, said there must be intelligent life on the Moon. Epicurus taught that there must be an infinity of life-supporting worlds. Plutarch was down with the whole Moon-dwellers idea, and in the second century A.D. Lucian wrote the first journey-to-the-moon story.

On the other hand, Plato and Aristotle would have none of it, and their view that no other worlds could exist, and therefore no intelligent inhabitants of such worlds, held sway right up until Copernicus put the sun at the center of things and Galileo aimed his telescope at the moon. The philosophers of their time began debating the question of what it would mean if there were intelligent aliens, recognizing that their existence would dethrone humanity as the center of creation just as astronomy had dethroned the Earth as the center of the universe.

Concurrently, authors begin telling tales of encountering such aliens, frequently living on the moon. Those early “aliens” tended to be the literary equivalent of the aliens of pre-CGI television—nothing more than humans in rubber suits, wearing prosthetic head bumps, or forced into funny ears.

By the 19th century, though, science—in particular, Darwin’s theory of evolution—had given writers the wherewithal to imagine aliens that, having evolved in a completely different environment, were deeply different from us. The Science Fiction Encylopedia credits Camille Flammarion with imagining the first truly alien aliens: he conceived of intelligent, gentle trees; seal-like creatures with tentacles who, like sharks in the ocean, had to be in constant motion through their atmosphere to breathe; even animals and plants made of silicon (hello, Star Trek’s Horta) and magnesium.

Then came The War of the Worlds. Wells’s invading Martians, whose rapacious nature was clearly heavily influenced by the Darwinian notion of “survival of the fittest,” observed us for a long time, laying their plans, and then set out to conquer us, using their superior technology. They are completely inhuman (gray, leathery, many-tentacled) and ill-adapted to the Earth (which makes one wonder exactly why they wanted it), having trouble with the higher gravity and the thicker atmosphere. Eventually, of course (spoiler alert!) they fall prey to common bacteria, their super science having apparently overlooked the germ theory of disease.

Alien invasion became something of a cliché after Wells, with most aliens, especially in movies, relegated to the role of BEMs (Bug-Eyed Monsters). But in modern science fiction, aliens are far more complex. They may, as the Science Fiction Encylopedia puts it, “have minds somewhat less capable than ours, of comparable capacity, of greater (even vastly greater) power, or minds so different that comparison becomes impossible. They may appear as invaders…or teachers, as allies or enemies, as victims of human exploitation or judges of human civilization, as Secret Masters guiding human history…or as utterly indifferent forces paying no attention to humanity at all. Aliens may look like us, resemble (more or less) any number of Earthly species, or take on shapes we have never seen or imagined, forms so strange we sometimes fail to recognize them (and they us) as fellow beings at all.”

Their appeal shows no sign of fading: witness the Oscar-nominated film Arrival, based on Ted Chiang’s Nebula Award-winning 1998 novella “Story of Your Life.”

Aliens challenge our place in the universe, offer authors the intellectual challenge of trying to imagine a form of intelligence completely different from our own, and hold up a mirror in which to reflect humanity’s foibles. They are one more example of what has always drawn me to science fiction: it is the ultimate intellectual playground, the one literary form (with its cousin, fantasy) in which whatever you can imagine can be made real, even little green men—or tall winged tri-sexed hive minds with tentacles—from outer space.

How cool is that?

Permanent link to this article: https://edwardwillett.com/2017/05/aliens-in-science-fiction/