This is a belated posting of my column from the February-March 2017 issue of Freelance, the magazine of the Saskatchewan Writers Guild. Don’t know how I missed posting it, but better late than never! 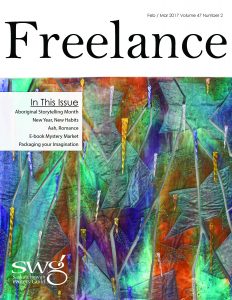 However, different authors take different approaches to the use of magic in stories. In older books of the fantastic (think The Lord of the Rings), magic is (in the words of Brian Niemeier, winner of the inaugural Dragon Award for Best Horror Novel in 2016 for Souldancer) “mysterious, ineffable, and unpredictable,” whereas in most modern fantasy, magic is more likely to work “like a technology that we can systematize.” It’s the latter form of magic that has given rise to the term “magic system”: the rules established by a writer of fantasy to which the magic in his books adhere.

The designing of such systems seem to be a topic of endless fascination for those interested in writing fantasy, which is presumably why Niemeier wrote his essay, “How to Design Magic Systems,“, from which I just quoted. It’s also why I was on a panel entitled “How to Build a Consistent and Original Magic System” at the 2014 edition of the annual—and highly recommended—Calgary writing conference When Words Collide .

The star attraction of that panel was not, alas, me, but rather Guest of Honour Brandon Sanderson, widely acknowledged as among the best at crafting interesting magic systems for his bestselling novels.

Over the years, Sanderson has formulated his approach into laws, three of which (so far) he has explicated on his website, starting with his First Law: “An author’s ability to solve conflict with magic is DIRECTLY PROPORTIONAL to how well the reader understands said magic.”

Sanderson recounts how, while on a convention panel on magic early in his career, he stated as a given that, “Obviously, magic has to have rules,” and was shocked to be challenged by the other writers. They claimed systematizing magic robbed fantasy of its sense of wonder: that sense of the “mysterious, ineffable, and unpredictable.”

Sanderson calls that kind of magic “soft magic,” and he and Niemeier point out the problem it sets for writers: because it has no rules, it cannot be used to regularly solve story problems without becoming a deus ex machina. Since we don’t know what magic can and can’t do, every time magic is used to solve a problem faced by the characters the reader is left wondering why magic doesn’t solve all the characters’ problems—which of course would destroy the narrative.

Systematized magic, on the other hand, which Sanderson terms “hard magic,” operates in accordance with strict rules. Looking at my own books, in Magebane, magic requires energy in the form of heat, so the palace has giant coal furnaces; in my Masks of Aygrima series, magic is literally mined, and most magic-users must have a store of it handy in order to perform magic; and in my Shards of Excalibur series, my young protagonist can dissolve into water and travel anywhere it goes—but only fresh water, and she can only reappear in water deep enough to submerge her (giving swimming pools and ponds an unusually prominent role in the narrative).

These limitations heighten narrative tension, because magic is not always available to solve problems, and shape the plot, as the characters struggle to find ways to use their magic.

Or, as Sanderson puts it in his Second Law: “Limitations > Powers”; it’s by putting limits on magic that you make it interesting. Superpowers are a form of magic, and as Sanderson points out, how dull a character would Superman be if not for his Achilles’ Heel, Kryptonite? (For that matter, how dull a character would Achilles himself have been if not for his famous heel?)

Sanderson’s Third Law is, “Expand what you have before you add something new.” Or, as he sums it up, “A brilliant magic system for a book is less often one with a thousand different powers and abilities—and is more often a magic system with relatively few powers that the author has considered in depth.” This ties in with the previous laws quite nicely. The more magical powers that are available, the easier it is for someone to solve their problems with magic, which may result in a flabby narrative.

Note, despite Sanderson calling them “laws,” they are of course nothing of the sort—more “suggestions from experience.” After all, wizards in the Harry Potter books certainly have “a thousand different powers and abilities,” and limitations seem few, but the J.K. Rowling did all right.

In truth, there is only one absolute law of creating magic systems: it has to result in a better story.

Or, as Niemeier sums it up: “In magic as in everything else, make it fun for the reader.”

Permanent link to this article: https://edwardwillett.com/2017/05/the-space-time-continuum-creating-magic-systems/