A Safe and Prosperous Future 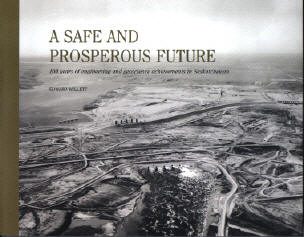 100 years of engineering and geoscience achievements in Saskatchewan

Published by the Association of Professional Engineers and Geoscientists of Saskatchewan
Trade Paperback, 232 pages, ISBN 0973875801

A lavishly illustrated history of some of the most significant engineering and geoscience achievements in the province of Saskatchewan over its first century of existence.

Buy A Safe and Prosperous Future

“A Safe and Prosperous Future — 100 Years of Engineering and Geoscience Achievements in Saskatchewan — (has) a title that makes this book sound much duller than it really is.

“The Association of Professional Engineers and Geoscientists of Saskatchewan (APEGS) decided to mark its 75th anniversary with a book — which it wisely put in the hands of freelancer Edward Willett, whose prodigious output includes science fiction novels, biographies and a weekly science column.

“As a result, this book is fun to read, well-illustrated and studded with the occasional pun. It’s divided into thematic chapters like building grain elevators and farm machinery, the South Saskatchewan River Project (including the Gardiner Dam and Lake Diefenbaker), and the provincewide electrical, telecommunication and highway networks.

“There are sections on getting energy out of the ground and on mining coal, bentonite and uranium. In Willett’s skilled hands, digging for potash through the water-bearing Blairmore formation sounds like an adventure novel. This book is current enough to cover enhanced oil recovery, diamond exploration, Regina’s “Big Dig,” high-tech research, plus the Canadian Light Source in Saskatoon.” – Will Chabun, Regina LeaderPost

Permanent link to this article: https://edwardwillett.com/nonfiction/safe-and-prosperous-future/