Andy Nebula: Interstellar Rock Star (From the Street to the Stars)

From the Street to the Stars (Andy Nebula: Interstellar Rock Star, Book 1), is now formally available in print, as well as ebook, format!

Andy Nebula: Interstellar Rock Star was my first published science fiction (as opposed to fantasy) novel. It appeared in print from Montreal’s Roussan Publishers in 1999. It was named to the Canadian Children’s Book Centre’s prestigious Our Choice list and was a finalist for the Manitoba Young Readers’ Choice Award.

Now it’s available again, in a completely revised version, in both ebook and print.

Buy from any of these links:

The original Andy Nebula: Interstellar Rock Star had some great reviews, but my favorite was this one from a young reader’s book report, which I found online:

“The book is like Star Wars plus drug dealers plus rock stars all joined into one book. If you like to read about that stuff then you will love this book…This is a cool book so check it out!”

After a lifetime of sleeping in alleys and flophouses, Kit’s musical talent is discovered, and he is remade into Andy Nebula.

Well-fed, content with a warm bed and contract, Andy begins to wonder why every previous “Sensation Single” star was a flash-in-the-pan. Little does he know that the answer lies with the off-world Hydras and their taste for music and flash, a drug forbidden to humans…and that he is their next fix.

And here are some more reviews:

“The action in Andy Nebula moves along at a cracking pace and the characters are well-drawn…Andy Nebula is fast and furious enough to keep even reluctant readers turning the pages, and young teen fans of fantasy and science fiction will not be disappointed.” – John Wilson, Quill & Quire

“… gritty and clever…Willett tells a fast-moving tale that has plenty of colour. He wastes few words and presents some good characterizations…All in all, a worthy addition to a young reader’s shelf of SF books.” – A. L. Sirois, SF Site

“It’s the combination of the familiar with the speculative that lifts Andy Nebula above the crowd…From page one we know we are in another time and place thanks to Willett’s deft and never-faltering use of a convincing invented slang…Get one copy for yourself, and another for a young person.” – Donna Farley, NCF Guide to Canadian Science Fiction and Fandom

“Willett writes in a humorous and flamboyant style not unlike an old-style detective novel…The novel is fast and exciting with lots of action. It also involves broader themes like differentiating between the authentic and the contrived, values and measuring success, drug addiction and tolerance between species…The writing is trim and humourous but far from vacuous. This book is fun to read. Kids will like it, too.” – Jocolyn Caton, The Regina Su

“The book is like Star Wars plus drug dealers plus rock stars all joined into one book. If you like to read about that stuff then you will love this book…This is a cool book so check it out!”

Permanent link to this article: https://edwardwillett.com/science-fiction/andy-nebula/ 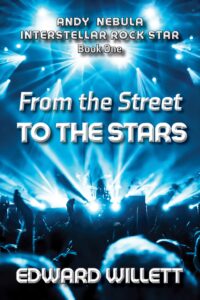 Read the first two chapters of From the Street to the Stars (Andy Nebula: Interstellar Rock Star, Book 1)

Amazon.com | Amazon.ca | Kobo Download ebook direct from Shadowpaw Press Chapter One An Unexpected Roommate Cold wind lashed my face. Cold rain dribbled down my back. My fingers throbbed like I’d slammed them in a door, my toes squished in my waterlogged boots, my throat felt as rough as rusty iron, and my nose …

Science Fiction and Fantasy Blue Fire Shapers of Worlds The Worldshapers Series Paths to the Stars: Twenty-Two Fantastical Tales of Imagination I Tumble Through the Diamond Dust The Cityborn The Shards of Excalibur The Masks of Agyrima Trilogy Magebane The Helix War Lost in Translation Right to Know Falcon’s Egg Spirit Singer The Haunted Horn The Chosen Andy Nebula: Interstellar Rock Star (From the Street to the Stars) Soulworm The Dark Unicorn Short Stories Plays