An epic young-adult fantasy written under my pseudonym E.C. Blake and published by Shadowpaw Press.

Buy it now in print or ebook!

“Great world-building, a fantasy feel with an SF twist, admirable characters, and the themes of courage and truth above all make (Blue Fire) a wonderful YA read. I know my teen will really enjoy it.” – Book Horde

“Though many YA fantasies are coming-of-age novels, this one is different in that perhaps it’s time not only for the young protagonists to take on active, responsible roles, but for their communities at large to leave behind old behaviours and interactions . . . In a few images, (Blake) presents the differing communities of his protagonists, making these young people and their surroundings distinct and memorable . . . Anyone who can write with such immediacy about light, rain, and mystic discipline has my attention!” – Paula Johanson, author of Tower in a Crooked Wood

From the author of the acclaimed fantasy trilogy The Masks of Agyrima, published by DAW Books, comes another epic YA fantasy adventure.

Centuries ago, the people of Nevyana were forced to leave their old kingdom across the sea after it was devastated by the War of the Twelve Gods. The only three Gods to survive that war, Vekrin of the Earth, Arrica of the Sun, and Ell of the Moon, agreed to leave the affairs of men alone–but not until they gave their followers a few final magical Gifts.

Vekrin and Arrica gave their followers the gift of Blue Fire, a powerful force that could provide light, heat, and protection–or be turned into a powerful weapon. But Ell chose instead to utterly transform her followers into the almost feline Nightdwellers, nocturnal creatures with fur, teeth, and claws.

Enmity quickly arose among the three groups, and now the Nightdwellers rule the night, killing any ordinary humans they catch out after sunset. Vekrin’s followers became the Citydwellers, retreating behind stout walls of stone, protected by the Blue Fire-powered firelances of the Priests. And Arrica’s followers became the Freefolk, able to travel through the wilderness protected by a Fence of Blue Fire, but always in danger of Nightdweller attack.

When sacred objects for channelling Blue Fire are stolen, three sworn enemies, Petra of the Citydwellers, Amlinn of the Freefolk, and Jin of the Nightdwellers, set out to find them, and their paths converge on a collision course with the truth. Can they bridge the centuries-old division among their communities? Or will their search for the truth and the explosive power of Blue Fire signal the end of Nevyana?

Permanent link to this article: https://edwardwillett.com/science-fiction/blue-fire/ 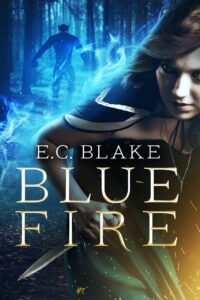 Science Fiction and Fantasy Blue Fire Shapers of Worlds Star Song The Worldshapers Series Paths to the Stars: Twenty-Two Fantastical Tales of Imagination I Tumble Through the Diamond Dust The Cityborn The Shards of Excalibur The Masks of Agyrima Trilogy Magebane The Helix War Lost in Translation Right to Know Falcon’s Egg Spirit Singer The Haunted Horn The Chosen Andy Nebula: Interstellar Rock Star (From the Street to the Stars) Soulworm The Dark Unicorn Short Stories Plays