In the past week both the title and the cover have been finalized for Book 3 of the Worldshapers series. Book 3, which takes place in a world of werewolves and vampires (and also normal …

My podcast, The Worldshapers, wins an Aurora Award!

Last Saturday, October 19, at the ceremony in Ottawa hosted by Can*Con, I was honored to receive this year’s Aurora Award for Bet Fan Related Work for my podcast, The Worldshapers. The Prix Aurora Awards are Canada’s fan-nominated-and-voted-on awards …

Some recent interviews and reviews 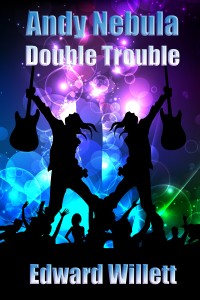 Andy Nebula: Interstellar Rock Star was my first published science fiction (as opposed to fantasy) novel. It appeared in print from Montreal’s Roussan Publishers in 1999, and received some very good reviews, most notably in Quill & Quire; it was also named to the Canadian Children’s Book Centre’s prestigious Our Choice list.

This prompted me to write a sequel, Andy Nebula: Double Trouble; but before that could even be seriously considered for publication by Roussan, the company went out of business. But that’s not an obstacle any more, with the advent of ebooks. So here it is: the previously unpublished sequel to Andy Nebula: Interstellar Rock Star, now free to read on Wattpad.

Teenage musician Kit is no longer Andy Nebula, interstellar rock star. In fact, he’s no longer a star at all. Reduced to playing dingy dives on Earth, he agrees to his friend Meta’s request to go back to being Andy Nebula for a one-time benefit concert…only to discover that someone else in the galaxy is passing himself off as Andy Nebula instead. Soon Kit, Meta and their friend Rain, the orange, tentacled alien cop, find themselves caught up in an interstellar assassination conspiracy–with nothing less than the peace of the galaxy at stake!

“The action in Andy Nebula moves along at a cracking pace and the characters are well-drawn…Andy Nebula is fast and furious enough to keep even reluctant readers turning the pages, and young teen fans of fantasy and science fiction will not be disappointed.” – John Wilson

“… gritty and clever…Willett tells a fast-moving tale that has plenty of colour. He wastes few words and presents some good characterizations…All in all, a worthy addition to a young reader’s shelf of SF books.” – A. L. Sirois

“It’s the combination of the familiar with the speculative that lifts Andy Nebula above the crowd…From page one we know we are in another time and place thanks to Willett’s deft and never-faltering use of a convincing invented slang…. There’s a whole lot of story packed into the 166 pages of this trade paperback…Get one copy for yourself, and another for a young person.” – Donna Farley

“Willett writes in a humourous and flamboyant style not unlike an old-style detective novel…The novel is fast and exciting with lots of action. It also involves broader themes like differentiating between the authentic and the contrived, values and measuring success, drug addiction and tolerance between species…The writing is trim and humourous but far from vacuous. This book is fun to read. Kids will like it, too.” – Jocolyn Caton, The Regina Sun

…Jelena, a young reader in Manitoba…

…and Jonathan, another young Manitoba reader!

“The book is like Star Wars plus drug dealers plus rock stars all joined into one book. If you like to read about that stuff then you will love this book…This is a cool book so check it out!

Permanent link to this article: https://edwardwillett.com/science-fiction/double-trouble/

Chapter One The beer bottle just missed my right ear before crashing into the brick wall at the back of the stage, spraying me and my battered old stringysnth with a fine, sticky mist. Glass shards skittered around my feet. Nobody in the crowded Parisian bar paid the slightest attention. That didn’t really surprise me: …