Buy an autographed copy from my online bookstore!

Falcon’s Egg, the sequel to Right to Know, is a fast-paced action-adventure. Discovering a plot to reassert Imperial control over the recently rediscovered Peregrine, Lorn Kymbal tracks the conspirators into the deepest and most dangerous reaches of the planet and beyond. Kymbal, a veteran of the war of liberation that almost costs his life, fights killer robots and his own inner demons as he tries to win freedom for himself and his planet.

“In Falcon’s Egg, Edward Willett takes on the notion of heroism itself, exploring the casualties of war and the results of battle on the psychology of the protagonist who has endured the traumas of war. Falcon’s Egg is a text of revolution, a war narrative with a bit of frontier ideologies since it is set on an alien world that is in conflict with the more technologically developed centrist planets. However, unlike most exploration, war, revolution, and adventure narratives who uncritically cast the hero as a figure who is above trauma, Willett’s narrative explores the toll that heroism takes on the mind of the hero as well as the toll that it takes on human lives and society.” – Derek Newman-Stille, Speculating Canada

“Falcon’s Egg by Edward Willett is space opera/action-adventure novel in the grand tradition, full of interplanetary intrigue, chases through the abandoned bowels of giant spaceships, and shootouts with everything from shotgun shells to beam weapons. Oh, and there’s an army of evil robot spiders. This book is a fun, easy read, and I got through it in two nights.” – Ty Black, Dark Futures Fiction

Permanent link to this article: https://edwardwillett.com/science-fiction/falcons-egg/ 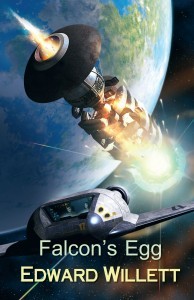 The sequel to Right to Know, Falcon’s Egg, published by Bundoran Press, is a fast-paced action adventure. Discovering a plot to reassert Imperial control over the recently rediscovered Peregrine, Lorn Kymbal tracks the conspirators into the deepest and most dangerous reaches of the planet and beyond. Kymbal, a veteran of the war of liberation that almost costs his life, …

Science Fiction and Fantasy Blue Fire Shapers of Worlds Star Song The Worldshapers Series Paths to the Stars: Twenty-Two Fantastical Tales of Imagination I Tumble Through the Diamond Dust The Cityborn The Shards of Excalibur The Masks of Agyrima Trilogy Magebane The Helix War Lost in Translation Right to Know Falcon’s Egg Spirit Singer The Haunted Horn The Chosen Andy Nebula: Interstellar Rock Star (From the Street to the Stars) Soulworm The Dark Unicorn Short Stories Plays