When the winter wind scours the prairie, it has a way of laying bare secrets…even those thought long-dead and buried. 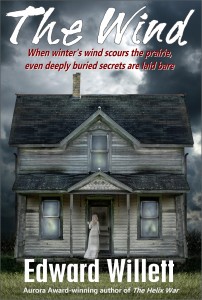 “The Wind” originally appeared in Dark Wisdom: The Magazine of Dark Fiction, Issue 11

From G-Pop: “The Wind by Edward Willett brought back memories of another ghostly tale by none other than Edgar Allen Poe, entitled The Tell-Tale Heart. At first you feel some sympathy toward this man who, once happily married and at home in his childhood home, finds himself alone, his wife gone and his house seemingly working against him. Sympathy, that is, until you discover just why the house seems to be falling apart around him…”

Sample of “The Wind”…

The wind rose in the night.

Carl Seitz woke to the moaning of the eaves and sleepily reached for the other side of the bed–only to come suddenly awake when all his reaching fingers touched was the smooth, cool flatness of an empty sheet. He’d slept alone for a month, but still, every night, the realization twisted his gut into a painful knot.

The window rattled, shuddering in its frame under the onslaught of the wind, as though something outside very much wanted to get in. Jennifer loved to listen to the wind, Carl thought. He could picture her lying beside him, could hear her rich alto. “Listen to it, Carl,” she said. “It sounds so free, so alive…doesn’t it make you want to just pack your bags and follow it, follow it wherever it goes?”

He rolled over and closed his eyes, but the dull ache of grief and the wind’s rising howl would not let him sleep. He sat up and looked at the clock radio for the time, but its bright-red digits had vanished…and hadn’t he left the radio playing?

The power must be out, he thought. He reached for his watch. Its lighted dial told him what he didn’t really want to know: 2:47 a.m. From experience, he knew he wouldn’t get any more sleep that night…and night, in Saskatchewan in mid-December, would stretch on another six interminable hours.

The window shook again. Carl pulled the covers over the cold tip of his nose. A deep chill pervaded the room, far more than even the northwest wind sharpening its claws on the outside walls could account for. Had the furnace gone out?

He’d better get up and check. There wasn’t much point in staying in bed anyway.

He rolled out of the bed and knelt on the shag carpet, feeling for his clothes. Shivering, he pulled on the blue-and-red sweater Jennifer had knitted him for their first Christmas together, five years ago now. “It will keep you safe from the wind,” she’d said. He fingered the sweater’s herringbone weave. Those had been good days. Too bad they hadn’t lasted.

The power failed often on the isolated old farm, so Carl always kept a flashlight in a drawer in the night-table. He fumbled it out and switched it on, and instantly the wind screamed so loudly he almost dropped the heavy light.

Something moved in the darkness at the edge of his vision. Heart pounding, he jerked the light around, lighting up one of the rose-covered curtains and he’d insisted on over Jennifer’s objections. It shifted slightly as he watched.

Carl frowned. He’d have to check the storm windows, too. But first things first: the furnace.

He felt his way cautiously down the creaking stairs to the kitchen, gripping the banister all the way, and paused there in the darkness. The old Formica-topped table and green vinyl chairs he’d refused to let Jennifer replace had belonged to his parents and were the ones he’d grown up with, as was the old round-cornered refrigerator. They were as familiar to him as his own face in the mirror.

But lately, whenever he came down here, all he could think of was Jennifer, sitting at the table that last stormy afternoon, her half-finished cup of tea long since gone cold, listening to the crying of the wind. And tonight, without Jennifer, without the friendly green lights of the stove and the microwave, without even the usual faint orange glow from the yard light outside, everything seemed strange, almost threatening. The refrigerator, its constant rattling hum silenced, loomed in the corner, a half-seen, oddly unfriendly presence. Even when he shone the light on it, he could not escape the feeling that something lurked just beyond the innocent white circle of light on the smooth metal door.

“So I’ll clean out the moldy stuff tomorrow,” he muttered. Despite the wind, the air in the kitchen somehow felt as stifling and still as the air in the bedroom had been cold and drafty. His words sounded dull and lifeless to his own ears, and he clamped his mouth shut.

Permanent link to this article: https://edwardwillett.com/science-fiction/short-stories/the-wind/