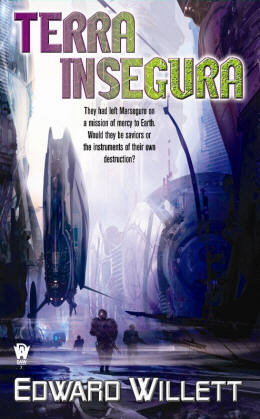 A little bleaker, a little less “gosh-wow” sensawunda (due to familiarity), a lot closer to home, Terra Insegurais the perfect balance to Marseguro: you’ve got to read this one if you read the first. It does stand on its own, but why deny yourself the pleasure of the full literary tapestry Edward Willett weaves with these two?

Willett keeps his characters moving all over the board, but always toward their stated goals (rational or not), which will just happen to intersect in an Earth-shaking conflagration. While I was disappointed each time a story-line chopped off, it brought me back to another I wanted to follow as well. Willett is well able to keep all his juggling balls in the air at the same time.…It’s a good story, a great mate to the first volume, but a little dark. It isn’t a tale of victory so much as a story of survival scratched from the jaws of annihilation.

Terra Insegura is an action-packed thrill-ride that outshines its predecessor…Plot twists, surprise characters, and well-drawn action make this novel both enjoyable and a prime example of why science fiction is still awesome. I find it difficult to complain about this novel, because I had problems putting it down. TerraInsegura has just enough action to keep me fixed to the page, and plenty of suspense (and even a little romance) to make this more than just another book of explosions and space battles. It’s a novel that knows it is good science fiction and isn’t afraid to show it…science fiction at its best.

From Book Chick on Good Reads:

Set in the far future, Terra Insegura and Marseguro are a little window in to the way intolerance (and all kinds of isms) can be taken to a frightening extreme. Even within the Body, though, there is hope for understanding, and this seems to be a major theme of the series – the difference between knowledge and understanding.

Sometimes, there is a reticence to pick up Science Fiction titles unless you’re already a Sci-Fi fan. Willett’s books are kind to the Sci-Fi ‘newbie’…one of the great things about Science Fiction is how, as a genre, it tends to address “really big questions” and ideas. Marseguro and Terra Insegura do this, in a comfortable and approachable way. You needn’t be reticent about these books. Both of Willett’s books in this series have a wonderful, driving pace, which, when coupled with multiple well-rounded characters and fascinating stories, make wonderful, captivating books that deserve to be read over and over.

From a 17-year-old reader at Flamingnet.com:

“Terra Insegura by Edward Willett is a science fiction novel with a highly original plot. …an engrossing novel that has many unexpected twists and turns…a fantastic, entertaining and at times nail-biting read that readers will thoroughly enjoy. Although the end is satisfying it does come abruptly. Fans of Ender’s Game will find a good read here…

“The characters are quite believeable and the reader is really able to care about them and become drawn into their world. Willett’s use of description is great and involved, making the reader really interested in the events of the story…I would recommend Terra Insegurato all fans of science fiction and even to those who want to try reading the genre for the first time.”

Edward Willett’s Terra Insegura is a sequel to his Marseguro. As happens all-too-often with reviewing, I haven’t read that previous book. However, that does make me eminently qualified to declare that Willett did an outstanding job writing Terra Insegura in such a way that it makes sense to new readers…

While the world and non-villain characters are highly enjoyable, however, one of the high points of Terra Insegura is Willett’s skill with action. The pacing (other than a slight lag in the middle) is tension-packed, and the action scenes gripping. I was in the mood for some good old-fashioned SF adventure, and Terra Insegura delivered!

From Ian Hecht at Marturia.net :

Willett’s usual moral tale style is in high gear here, with the logical next step of the question he posed in Marseguro, “What makes someone human?”  When the Selkies are forced to confront their prejudices not only of “normals”, but also of a race far more modified than their own, questions arise as to where to draw that line.  How the different characters answer the question ultimately decides their fate for them…

As with all of Willett’s science fiction, the science is well handled, from genetically modified humans and bioengineered viruses, to faster-than-light travel and molecular fabrication.  His light touch lets us know what the futuristic technology can do without bludgeoning us with technical details.  It’s believable enough in the universe that he has crafted.

The moral foundation for the book seems to be that who were are depends on how we react to the poor choices we’ve made – whether we take responsibility for setting them right, divorce ourselves from blame and lay it elsewhere, or detach ourselves from reality and claim that everything that’s happened, good and bad, is predestined and we are all just playing parts.  Willett’s heroes are the ones who step up and do the right thing, and those who refuse to do so get their comeuppance in the end.

From Lilyraines at Night Owl Reviews:

I found the book to have an intriguing take on genetic modification and what could go wrong. It also talks about obsession, arrogance, and a rigidly imposed belief that does not see anything beyond it…

Terra Insegura also shows through its characters how people who may not entirely trust each other can, in the end, respect each other and learn to work together.

Permanent link to this article: https://edwardwillett.com/science-fiction/the-helix-war-2/terra-insegura/reviews-of-terra-insegura/