Return to The Masks of Agyrima Trilogy 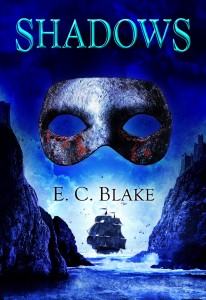 “Fans of Masks will not be disappointed with Blake’s amazing sequel, Shadows. The magic continues in this enthralling adventure, grabbing the readers’ interest and holding it until th final page. Each chapter brings a new twist in the already sensational story. Blake creates the perfect mix of adventure and romance as the main character, Mara Holdfast, struggles to come of age in a world that is quickly changing. Mara’s struggle is relevant to readers of any age.” – RT Book Reviews Magazine, Top Pick for August 2014

“Raw, powerful, emotional and intense. Shadows is a book that captivated me from page one and had me literally on the edge of my seat. A year until the next book?!  It’s going to be a long year, I need it NOW!” – Candace’s Book Blog

“More action-packed and fast-moving than the first…I highly recommend this series for fantasy fans!” – Not Yet Read

“I devoured this story. I was hanging on to every word…The Masks of Aygrima’s dark magic, powerful young heroine, and group of rebels plotting to overthrow a tyrannical leader make this an addictive series that I would recommend to any fantasy fan.” – Addicted 2 Heroines

“Full of suspense, mystery, magic, and a bit of romance – the intensity builds to a climactic ending. I look forward to the next in this incredible fantasy series.” – SciFi Chick

In Masks, Mara Holdfast’s life changed forever. As the daughter of the Autarch’s Master Maskmaker, she had a clearly defined future: working with her father to make the Masks that must be worn by all adults—Masks imbued with a magic that would reveal any treasonous thought about the ruling Autarch. But when her own Mask cracked and fell to pieces during her Masking ceremony, Mara was exiled from everything she once knew. Rescued by an underground rebel group known as the unMasked Army, Mara was recruited to their cause when she learned the shocking truth about the Autarch’s reign.  And in a moment of crisis, Mara drew upon a volatile magical talent neither she nor her allies could understand or control.

In Shadows, Mara faces staggering new challenges as she struggles to master her terrifying, almost addictive ability to use all types of magic—and to rip magic from those around her to fuel her power.

When Chell, a young man from across the sea, is shipwrecked and washed ashore outside the rebels’ hidden base, it signals the first contact in centuries with the world beyond the borders of the Autarchy of Aygrima. But whether Chell and his people will help the unMasked Army or betray them to the Autarch is very much in question. His arrival, and Mara’s own need for answers that can only be found in the capital city of Tamita, sparks a covert mission to the seat of the Autarch’s power. It is there that an act of unspeakable brutality tips Mara dangerously close to madness…and in the midst of a desperate and bloody battle, she discovers just how horrifying her power can be….

“Brilliant worldbuilding combined with can’t-put-down storytelling…. Bring on the next in this highly original series!” — Julie E. Czerneda, author of A Turn of Light

“Masks is simply impossible to put down and will leave readers begging for the last two books in the trilogy.” — RT Book Reviews

“Blake brings his fantastic world to life through offbeat links between magic, nature, and human behavior in a caste-ridden society.” — Locus

Permanent link to this article: https://edwardwillett.com/science-fiction/the-masks-of-agyrima-trilogy/shadows/

SHADOWS By E.C. Blake Chapter 1: The Stranger from the Sea THE MASK GLEAMED WHITE against the dark surface of Mara’s workbench, like a pearl in an ebony box. It looked perfect, priceless, a masterwork of the Maskmaker’s craft . . . . . . and it was completely, totally, fatally wrong. “It looks good,” Prella said …

“The magic continues in this enthralling adventure, grabbing the reader’s interest and holding it until the final page. Each chapter brings a new twist in the already sensational story. Blake creates the perfect mix of adventure and romance…Mara’s struggle is relevant to readers of any age.” – 4 1/2 Stars, RT Book Reviews, Top Pick for …