Return to The Worldshapers Series

From the Saskatchewan Book Awards judges:

“Sustained excellence! Willett hits it out of the park with witty Shawna Keys and a fabulously entertaining cast of werewolves and vampires in this ingenious fantasy. Wild adventures, well-drawn settings, hilarious one-liners, a smart ending, and the strong sense of a writer having great fun as he spins his imaginative tale … readers will be licking their lips for Shawna’s next adventure.”

Fresh from their adventures in a world inspired by Jules Verne, Shawna Keys and Karl Yatsar find themselves in a world that mirrors much darker tales. Beneath a full moon that hangs motionless in the sky, they’re forced to flee terrifying creatures that can only be vampires…only to run straight into a pack of werewolves.

As the lycanthropes and undead battle, Karl is spirited away to the castle of the vampire queen. Meanwhile, Shawna finds short-lived refuge in a fortified village, where she learns that something has gone horribly wrong with the world in which she finds herself. Once, werewolves, vampires, and humans lived there harmoniously. Now every group is set against every other, and entire villages are being mysteriously emptied of people.

Somehow, Karl and Shawna must reunite, discover the mysteries of the Shaping of this strange world, and escape it for the next, without being sucked dry, devoured, or—worst of all—turned into creatures of the night themselves.

“Willett continues to use his innovative worldbuilding to play with genre tropes; there’s a tongue-in-cheek self-awareness to this desolate world that will please fans of dark fiction…entertaining.” – Publishers Weekly

“What a gripping fantasy and sci-fi world this author has crafted…the imagery of the world the characters find themselves in feels very cinematic in its approach, crafting a visual in the reader’s minds all the while. A powerful, lengthy yet entertaining sci-fi and fantasy epic. Rating: 10/10.” – Anthony Avina

“All of the myriad aspects of Edward Willett’s talent are obvious in this terrific blend of fantasy, references to great literature and history, and imagination proffered with a keen comedic sensitivity. He here further establishes his stance as one of our more important authors. Highly Recommended.” – TopShelf Reviews

“The Moonlit World was a detailed, exciting, and entertaining story line…I do love Shawna, as she is a great heroine.” – The Reading Café

Permanent link to this article: https://edwardwillett.com/science-fiction/the-worldshapers-series/the-moonlit-world/ 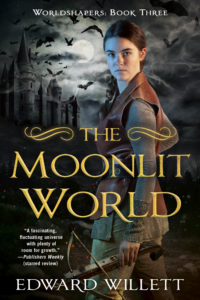 Read the prologue and first two chapters of The Moonlit World

Amazon U.S. | Amazon Canada | Indigo | Barnes & Noble | Penguin Random House |Indiebound  The third book in the Worldshapers portal fantasy series by an Aurora Award-winning author, in which one woman’s powers open the way to a labyrinth of new dimensions. Fresh from their adventures in a world inspired by Jules Verne, Shawna Keys and Karl Yatsar find themselves in a …

The Worldshapers Series Worldshaper Master of the World The Moonlit World