Purchase in ebook and audiobook from your favourite online store

This new novel from an Aurora Award-winning author presents a sci-fi caper of high-stakes interstellar travel.

More than a century ago, the network of MASTTs, the space-time tunnels that made interstellar travel possible, violently collapsed, the backlash destroying a lot of the solar system’s space-based infrastructure. Cooper “Coop” Douglas, a thief and conman, is in serious debt to outer-system crime-lord Eric Galioto. While trying to salvage a valuable chunk of a space station destroyed by the backlash, Coop makes a startling discovery: MASTT Primus, the tunnel that used to lead to New Earth, is open again. That raises an intriguing possibility: Coop could flee the solar system and his debt to Galioto and make a new life—and possibly fortune—around another star.

Accompanied by his first mate, the wisecracking, AI-uplifted, genetically modified cat Thibauld, Coop sets out to “liberate” the solar system’s only remaining functioning starship from an Earthside museum, enlisting the help of Laysa Grey, a former-lover-turned-cop on Luna. Along the way, he is pursued by Galioto and dogged by law enforcement and thugs.

And beyond MASTT Primus, the tangled stars await . . .

Permanent link to this article: https://edwardwillett.com/science-fiction/the-tangled-stars/ 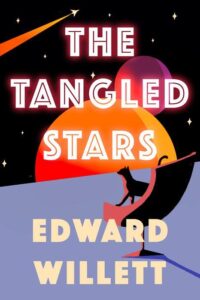 Read the first two chapters of The Tangled Stars

Buy from your favourite online store in ebook or audiobook This new novel from an Aurora Award-winning author presents a sci-fi caper of high-stakes interstellar travel. More than a century ago, the network of MASTTs, the space-time tunnels that made interstellar travel possible, violently collapsed, the backlash destroying a lot of the solar system’s space-based …

Science Fiction and Fantasy The Tangled Stars Star Song Shapers of Worlds Volume III Shapers of Worlds Volume II Shapers of Worlds The Worldshapers Series Blue Fire Paths to the Stars: Twenty-Two Fantastical Tales of Imagination I Tumble Through the Diamond Dust The Cityborn The Shards of Excalibur The Masks of Agyrima Trilogy Magebane The Helix War Lost in Translation Right to Know Falcon’s Egg Spirit Singer The Haunted Horn The Chosen Andy Nebula: Interstellar Rock Star (From the Street to the Stars) Soulworm The Dark Unicorn Short Stories Plays