Return to The Worldshapers Series

Master of the World

Longlisted for The Sunburst Award for Excellence in Canadian Literature of the Fantastic in the Young Adult Fiction category.

Finalist for the Muslims for Peace and Justice Fiction Award at the Saskatchewan Book Awards.

“Master of the World (Worldshapers: Book Two) shows Willett at his world-building best. Shawna Keys has lost everything in her previous world and now has to take on the challenges of a new one she has not created. This page-turner keeps readers of all ages losing track of time as they find themselves pulled further and further into Willett’s tense, challenging, and sometimes funny world.”

From an Aurora Award-winning author comes the second book in a gripping portal fantasy series in which one woman’s powers open the way to a labyrinth of new dimensions.

Shawna Keys has fled the world she only recently discovered she Shaped, narrowly escaping death at the hands of the Adversary who seized control of it…and losing her only guide, Karl Yatsar, in the process.

Now she finds herself alone in some other Shaper’s world, where, in her first two hours, she’s rescued from a disintegrating island by an improbable flying machine she recognizes from Jules Verne’s Robur the Conqueror, then seized from it by raiders flying tiny personal helicopters, and finally taken to a submarine that bears a strong resemblance to Captain Nemo’s Nautilus. Oh, and accused of being both a spy and a witch.

Shawna expects–hopes!–Karl Yatsar will eventually follow her into this new steampunky realm, but exactly where and when he’ll show up, she hasn’t a clue.

In the meantime, she has to navigate a world where two factions fanatically devoted to their respective leaders are locked in perpetual combat, figure out who the Shaper of the world is, find him or her, and obtain the secret knowledge of this world’s Shaping. Then she has to somehow reconnect with Karl Yatsar, and escape to the next Shaped world in the Labyrinth…through a Portal she has no idea how to open.

“In 2018’s Worldshaper, Shawna Keys discovered that she was a Shaper, capable of manipulating entire worlds to suit her will, and that the Earth she knew was a product of her power. Pursued by a mysterious Adversary, she fled her home. This lively, action-packed follow-up sees her trapped in a world inspired by the works of Jules Verne…

“Willett takes full advantage of the fanciful premise to deliver a fun setting populated by fantastic vehicles, mysterious islands, and heroic and villainous characters, all drawn from classic literature. In this larger-than-life arena, Shawna is often out of her depth, a heroine slowly coming into her power and responsibilities who struggles with the weight and consequences of her actions…returning fans will find it contains thrills aplenty.”

“Watching Shawna navigate and understand the Verne world is highly amusing and fun for readers familiar with his oeuvre. The Verne references are not the only fun, geeky element of the book: Shawna is comfortable making numerous nods to fandom of all kinds, and the specificity of the humor will delight those who share her interests. Plus, watching Shawna and her friend and teacher, Karl, fight against the Adversary for the better of the Labyrinth—the means by which all of the worlds connect together—is great. This series is for fans of any piece or part of geek culture. With the infinite possible worlds in the Labyrinth, every book should be a new, enjoyable adventure.”

Permanent link to this article: https://edwardwillett.com/science-fiction/the-worldshapers-series/master-of-the-world/ 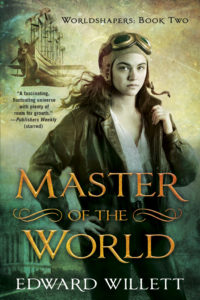 Read the first two chapters of Master of the World

Amazon U.S. | Amazon Canada | Indigo | Barnes & Noble | Penguin Random House |Indiebound |  From an Aurora Award-winning author comes the second book in a gripping portal fantasy series in which one woman’s powers open the way to a labyrinth of new dimensions. Shawna Keys has fled the world she only recently discovered she Shaped, narrowly escaping death at the hands of …

The Worldshapers Series Worldshaper Master of the World The Moonlit World