Ten sci-fi gadgets that may soon be real: Part 1

My preview of Trio Frontenac is online

Title page of my next children’s non-fiction book 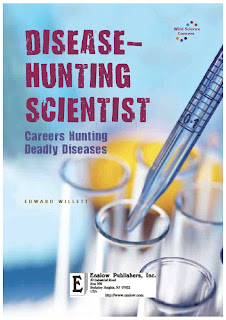 Just got the PDF of the rough layout of what will probably* be my next-published children’s non-fiction book, Disease-Hunting Scientist: Careers Hunting Deadly Diseases–that’s the title page at left. It’s part of a series from Enslow Publishers called Wild Science Careers.

It’s been interesting to work on, since I got to interview several scientists who have studied diseases as varied as Marburg, Ebola, bird flu, SARS and black-band disease in coral. The focus of the series is on scientists who work “in the field,” as opposed to just in a lab, so these men and women have travelled all over the world, waded through swamps, camped out in the Alaskan wilderness, plunged into bat caves, and scuba-dived in the Atlantic in pursuit of knowledge.
I don’t know when it will be released, exactly, but it’s obviously getting closer!
*I say probably, because there’s also a book on the mutiny on the Bounty and biographies of Andy Warhol and Johnny Cash in the pipeline at Enslow.

Permanent link to this article: https://edwardwillett.com/2009/01/title-page-of-my-next-childrens-non-fiction-book/