Return to Lost in Translation

Reviews of Lost in Translation 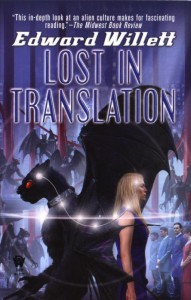 “This book has it all: great aliens, brilliant world-building, a breakneck plot, and a message that resonates with our times. Edward Willett has arrived, and SF is the richer for it.” – Robert J. Sawyer, Hugo Award-winning author of Hominids

“In Ed Willett’s universe, greed and intrigue aren’t unique to humankind, and humans and S’sinn aliens are the stuff of each others’ nightmares. One human and one S’sinn, called to translate a treaty that no one seems to want, are compelled to try and find a way out of the rapidly closing trap of treachery and hatred. Lost in Translation is a believable, absorbing, thought-provoking and highly enjoyable read.” – Kathy Tyers, Author of the Firebird trilogy, Star Wars: The Truce at Bakura, and Star Wars: Balance Point

“To call a Science Fiction tale ‘Old Fashioned’ is neither an insult nor an oxymoron. Willett has created an interstellar adventure story worthy of Golden Age masters like Isaac Asimov and Robert A. Heinlein. The pace is fast, the invention rich, and the plot twirls and twists like an Aldebaranian Woggle Dancer. Willett even pulls off that trickiest of SF finesses, the alien species that does not think like humankind and yet makes enough sense to capture our interest and sympathy. If you hanker after a journey to distant worlds and a visit to the Galactic Commonwealth, then reach for Lost in Translation.” – Dave Duncan, author of the Seventh Sword series, the King’s Blades series and the just-released Children of Chaos

“…for most readers (Edward Willett) will appear as a new author. And a very fine discovery he is!…Willett surprised me by writing a ‘first novel’ that was able to both tap into my nostalgia for the hard SF of my youth, and to provide a completely contemporary adult novel. The fast paced action kept me turning pages long after I should have been abed, and the anti-racist, anti-war message seemed particularly timely for the Bush administration’s War on Terror…Willett has long deserved the mass market distribution he is finally receiving, and Lost in Translation is far better space opera than the right-wing militaristic offerings of established writers like David Weber and Steve White. Suddenly, it’s worth looking in the ‘W’s again!” – Dr. Robert Runte, Neo-Opsis Science Fiction Magazine

“Science Fiction, with telepaths, cool looking cat creatures and the brink of war. How cool is that?…

“This one snuck up on me. I grabbed it because it looked like a fairly straight forward space yarn. The surprise came with a skillful observation of the possible effects of telepathy. If you can read a mind and that mind can read yours, you know everything they know. Everything they have done and why they did it. With no secrets to hide what’s left? Hatred or love. This story reveals that in the two telepaths from different planets fight to save their own planets from interstellar war. The book ended all too quickly for me. By the time I reached the end I wanted more.” – Sci-Fi & Fantasy Books and Music Review

“LOST IN TRANSLATION by Edward Willett is definitely a book science fiction purists will savor. Intrigue, the threat of interstellar war, and action all combine to make this tale a suspenseful and pleasant experience to those who enjoy intelligent writing and crafty storytelling…Each character in LOST IN TRANSLATION has his own ulterior motives, and it’s hard to keep track of who’s good and who’s bad, which adds to the intrigue. Having never read this author before, I look forward to reading a few of Edward Willett’s previous titles, hoping that they will be of the same caliber as LOST IN TRANSLATION.” – Courtney Michelle, Romance Reviews Today (Read the full review)

“Much more pleasing is Edward Willett’s Lost in Translation, not to be confused with the film of the same name starring Bill Murray. In this book humans and a race of gorgeous little flying creatures called S’sinn despise each other with a passion equal to the heat of a thousand suns. A misunderstanding escalated into a war, then into a Hatfields-McCoys mindset that clouds both species minds with hatred and prevents any kind of reconciliation. The governing council, seeing that this state of affairs will never do, decides to intervene and get to the bottom of the grudge match once and for all, and for that, they need translators: the two who are chosen must work against their own prejudices to come up with a solution for the future of both species, but it’s not going to be easy, as their backstories indicate. There are shades of Bradbury here in the style, which I personally find pleasing, and I’m also keen on the S’sin because it’s hard to create an alien race that isn’t ‘been there done that.’ Recommended for adult summer reading, as this is the kind of book you want to take out to the hammock and savor, while the sun still shines.” – Faster_than_light

“The plot twists and turns through personal intrigues, political intrigues, spatiopolitical intrigues…All in all, a good entertaining read with substance to it….You’ve really got to hand it to an author who can make you rather like a creature with tentacles around his beaked face who engages in Realpolitik.” –The Walrus Said.

“It’s a wellwritten book that surprised me in a number of ways. Willett does a wonderful job of bringing his characters alive for the reader, getting you interested in them, and having them do amazing things for all the right reasons. When I first bought the book, I did it for the cover. I was a little worried by it’s seemingly small size (compared to most books on the shelves these days) and that I would not get good value for my money. Boy was I wrong. It felt just the right size. I rather strongly recommend it.” – Jethric’s Mess

Permanent link to this article: https://edwardwillett.com/science-fiction/lost-in-translation/reviews/