The people of Frijoles Canyon

From Denver, site of last week’s column, I and my family headed south to the Land of Enchantment, a.k.a. New Mexico.

It’s a state famous for many things: beautiful scenery (it greeted us with a vast vista of green plains, blue mountains, and a rainbow); the fact that I was born there (okay, maybe “famous” is too strong a word); and, most importantly, a long and colorful history.

The Spaniards, on arriving in the area some 400 years ago, met the Pueblo people who live in New Mexico still, but before the Pueblos came the people long called the Anasazi, but now known simply as the Ancestral Pueblo people. (Apparently it finally registered on someone that using a term coined by the culture’s bitter rivals–Anasazi is a Navajo term for “ancient enemies”–was not exactly appropriate.)

The Ancestral Pueblo people are most famous for the dwellings they carved out of cliffs in various canyons–and last week, my wife and daughter and I explored some of those dwellings in Bandelier National Monument in Frijoles Canyon, not far from Los Alamos. 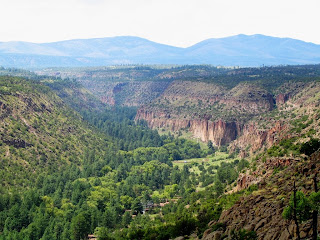 There are few sights as stunning as your first view, from high on the Pajorito Plateau, of the red rocks and green vegetation of Frijoles Canyon.

Pajorito Plateua was formed by two massive volcanic eruptions more than a million years ago that covered a 400-square-mile-area with a thousand feet of ash.

Over time, that ash became a rock called tuff, which is anything but: tuff is soft, crumbly, and erodes easily. Some parts of it erode more easily than others, which gives the walls of Frijoles Canyon a Swiss-cheese appearance. The Ancestral Pueblo people used tools to enlarge some of these natural small openings. Using the excavated rock and vigas (roof beams) cut from the ponderosa pines that grow in the canyon, they built multi-story stone dwellings in front of the enlarged openings.

Standing in the canyon, you understand why they bothered. Frijoles Canyon is a lush, well-watered, well-sheltered retreat from the much harsher desert landscape of the plateau. The stream that carved it, El Rito de los Frijoles (“the little river of beans”) is one of the few on the plateau that flows year round–even in years of extreme drought. 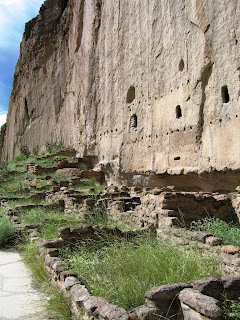 El Rito de los Frijoles not only provided the water the Ancestral Pueblo people needed for cooking and drinking, it attracted game (we came on a mother mule deer and her fawn during our hike), and watered native plants like the aforementioned ponderosa pine and the yucca, which provided soap, food, and fiber.

The stream’s water also allowed the Ancestral Pueblo people to develop the one thing that set them apart from previous inhabitants of the canyon (traces of whom go back 10,000 years): agriculture.

Even though corn was introduced to the American Southwest about 4,000 years ago, nomadic people didn’t cultivate it: they’d just scatter the seeds in various locations and harvest whatever happened to have grown when they returned to those spots.

But by 1200 A.D. the Ancestral Pueblo people were cultivating corn, beans and squash both on the plateau and in the canyon, and using various sophisticated methods (such as dams and catch basins) to control water flow. The population of the canyon grew, swelling to more than 700 by the late 1400s, and villages began to appear on the canyon floor as well as up by the walls.

And then, after 400 years, for unknown reasons, the Ancestral Pueblo people left. They moved south and east toward the Rio Grande, where their descendants still live today in New Mexico’s modern pueblos.

Maybe the game animals left as more and more land was cleared. Maybe there was a severe, multi-year drought. No one knows.

The Pueblo people haven’t lived in the canyon for more than 450 years, but they believe their ancestors still inhabit the place in spirit. 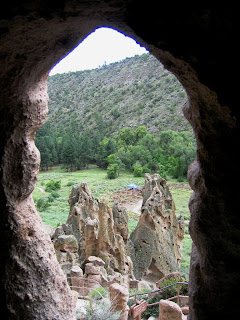 Maybe so. As you crouch in the rooms carved into the rock and look out at the green canyon floor, it’s easy to believe the people who laughed and lived there might still be around, just out of sight…waiting for the tourists to leave so they can reclaim their ancient homes.

Permanent link to this article: https://edwardwillett.com/2008/08/the-people-of-frijoles-canyon/