Photo of the Day: Historic Walks of Regina and Moose Jaw book launch

What I Just Read: Starclimber 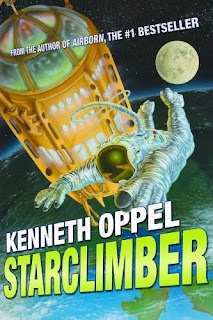 I loved Kenneth Oppel’s previous books in this series, Airborn and Skybreaker. And I enjoyed this one–but not as much.

Don’t get me wrong, it was great to catch up with Matt and Kate. But I just couldn’t quite suspend my disbelief at the notion of the successful launch of a space elevator cable using what’s essentially early 20th-century technology, even given that it’s based on some exotic material harvested from meteorites. At times the physics of zero-G didn’t ring quite true (not enough distinction between weight and mass–sure, you’re weightless in zero-G, but you’ve still got mass, so, for instance, tugging on an umbilical with an astronaut at the end of it is still going to produce resistance until the astronaut is in motion; weightlessness doesn’t turn him into a helium balloon). And while I was willing to grant the bizarre upper-atmosphere creatures featured in the previous books, filling space with the equivalent of plankton and whales…sorry, can’t buy it. Although if space were that full of living creatures, I guess you wouldn’t need to go looking for dark matter to make up the missing mass…
I guess you could say the cable on which my disbelief was suspended snapped sometime before I came to the end of the story, although I did appreciate the passing mention of Moose Jaw.
Still a good book–but not as good as the first two. IMHO.
Up next on my agenda: Midnight Never Come by Marie Brennan.

Permanent link to this article: https://edwardwillett.com/2008/09/what-i-just-read-starclimber/