Things I Found in my Mother-in-Law’s House: The Kitchen

What I’ve Just Read: The Big Chunk of Ice 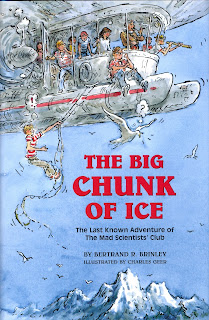 I enjoyed it, but probably only because I’d read those other collections first and have a soft spot in my heart for the first one in particular, which I read when I was the target audience: about twelve. I think the Mad Scientists’ adventures work better when they’re confined to mythical small town Mammoth Falls, and I also think they work better at short-story length. Put them out in the larger world (Austria, in this instance) and in a larger story and the suspension of disbelief becomes a little harder. And the book is seriously dated by the college student (a girl! Yes, there are girls in this book–a major change in and of itself!) who speaks some bizarre version of ’60s counterculture slang (which sounds more like ’50s beatnik slang to me, daddy-oh).

Had this book been published when I was 10 or 12, I’m sure I would have loved it. And, indeed, it was written when I was a teenager, but it wasn’t published until 2005, by Purple House Press. As it is, I’m afraid I more enjoyed it as an exercise in nostalgia than on its own merits.

Maybe my daughter will read it one of these days and I’ll see what a modern kid makes of the Mad Scientists.

Permanent link to this article: https://edwardwillett.com/2008/09/what-ive-just-read-the-big-chunk-of-ice/