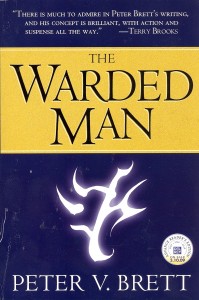 I received this copy of Peter V. Brett‘s The Warded Man (published in the U.K. as The Painted Man, by the way) in my book bag at World Fantasy Con in Calgary back in October, but it took me a while to get around to reading it–which is why I ended up reading an “Advance Reader’s Edition” long after the regular edition went on sale on March 10. (That’s the ARC cover on top at left, with the official cover below that for comparison purposes.)

As it happens, the best praise I can offer the book is that I wish I had read it earlier. It’s a very enjoyable fantasy with an intriguing concept–which I’ll let the back cover copy tell, since it’s an admirably concise summary of the story:

As darkness falls each night, the coreling rise, demons who well up from the ground like hellish steam. They possess supernatural strength and burn with a consuming hatred of humanity–ready to slaughter anyone unlucky enough to be outside a warded building after susnet. When tragedy strikes his tiny village and his family, young Arlen decides to brave the night roads as the kingdom’s Messengers do: facing the demons across thin air, with only the barrier of dirt-drawn wards to protect him.

Armed with a mysterious set of fighting wards, Arlen discovers an ancient artifact and becomes a legendary demon-fighter, the Warded Man. With the help of Leesha, a brave, expert healer, and Roger, whose music can hold demons at bay, Arlen attempts something not dreamt of since ancient times: a stand against the night. 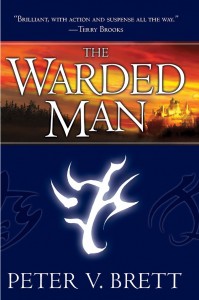 The Warded Man is an interesting book for a couple of reasons. One is that fascinating concept of demons rising from the Earth every night–how long can a society survive under that kind of duress? (Longer than you might think, but it’s clear that everywhere humanity is in decline.) Second is the way in which it’s structured. There is, of course, a long, long history in fantasy of children who find they’re actually something Very Special. Brett offers us not just one but three of these archetypical children in Arlen, Leesha and Rojer, introducing us to each of them when they are very young and taking his time explaining how they became the people he needs them to be at the book’s climax…which is, of course, nowhere near The End, since what you actually get at the end is a bit of a cliffhanger and the note, “End of Book I.”

They’re all interesting people with interesting baggage attached to them, and I look forward to spending more time with them in the next book.

In the meantime, do I recommend this book? I do, although I hope Brett has some believable explanation waiting in the wings for where the corelings come from and how humanity and the corelings could ever have come to co-exist on the same world. What do corelings eat when they can’t get humans, for example? They attack animals, too, but they seem to exist in such numbers it’s hard to believe they wouldn’t have stripped the world of all life over the centuries. But that may just be Grumpy Science Fiction Writer Me shouldering aside Enthralled Fantasy Reader Me. (My own next novel, Magebane–to be written as Lee Arthur Chane–will be a fantasy with its own scheme of magic. We’ll see how much luck Fantasy Writer Me has dealing with Grumpy SF Writer Me!)

It’s an unusual and well-drawn fantasy world, anyway, and this is a very solid first installment in a new series by a brand-new author who is well-worth picking up. Far more enjoyable than, oh, say, Wicked…

Oh, and Brett apparently wrote The Warded Man on his cellphone while commuting. He must have massive thumbs by now…

Permanent link to this article: https://edwardwillett.com/2009/05/book-review-the-warded-man-by-peter-v-brett/