It would be hard to improve on yesterday, when I won the Aurora Award for Marseguro (did I mention I won the Aurora Award? I did? Hmmm, imagine that), but today was another good day at the World Science Fiction Convention here in Montreal. After a great breakfast at a local cafe, I had my Kaffeeklatsche, a chance for readers to meet authors in a small group and ask questions. I had two at mine, one fewer than had signed up, and one of those two was our Ottawa friend who attended the con with us. But the one fellow who showed up was interesting to talk to, and so it was an hour well-spent.

I attended two presentations today, one on star maps from antiquity ’til today (very interesting) and one on Mars exploration, with a focus on the Canadian Space Agency. And then tonight I attended the dinner DAW Books threw for its authors at a fine local restaurant, Chez L’Epicier. Delicious food and good conversation.

And that brings me to now, when it’s after midnight and I’ve just returned to the hotel room!

Tomorrow I have a signing at 12:30 p.m., and then at 5 p.m. a supper meeting with my editor, Sheila Gilbert. Then it’s the Hugos. And after that, the con is practically over, although there are still panels on Monday and I have a reading. 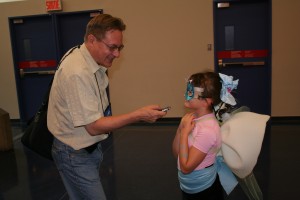 Oh, and I was interviewed today by Jessica Murphy of the Canadian Press: that story is online here. (I was also interviewed, purely by happenstance, by Will Nicholls, the editor of Nation, an independent aboriginal publication. I’ll be interested to see what if anything they make of that, since they also interviewed my daughter about the book she and I have been writing together–which is what is going on in the photo at left.)

Permanent link to this article: https://edwardwillett.com/2009/08/montreal-worldcon-day-3-food-glorious-food/