Song of the Sword recommended in Saskatoon Star-Phoenix

The Willetts on Wine: Madeleine Angevine and beyond: adventures in wine-tasting 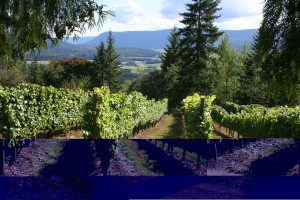 Adventure, discovery and exploring the unknown are all aspects of a great vacation—and a great wine-tasting.

This summer we had both, when our trip to British Columbia brought us the Larch Hills Winery in the Salmon Arm area. Upon discovering at our hotel that the Okanagan’s northernmost vineyards were only a few minutes’ drive away, we headed out with GPS in hand.

A winding, switch-back road took us to the top of a mountain, where both a vineyard and a spectacular view awaited.

Larch Hills specializes (for obvious reasons) in cool-climate viticulture. We tasted several of the winemaker’s offerings, and found, to our surprise, that our favourite was made from a seldom-heard-of grape variety called Madeleine Angevine.

A French grape that produces wines with Germanic style, it impressed with a full-on floral nose that reminded us of a bouquet of flowers…and a nicely balanced body and flavor that complemented that impression.

Inspired by our discovery, we decided on our return to Regina to continue our summertime wine exploration by looking for other unfamiliar varieties.

There are many single-varietal wines that are relatively new to consumers, such as Chenin Blancs and Argentinian Malbecs, but we wanted to find varietals we’d never even heard of.

There’s no shortage of those. Worldwide, thousands of varieties of grapes are used to make wine. More than 60 varieties are grown in the Okanagan alone (though only about 20 of those receive the bulk of the attention).

Many unfamiliar wine grapes are varieties of Vitis labrusca or Vitis aestivalis, native to North America, rather than the Vitis vinifera of European fame. Concord grapes are an example of labrusca (and yes, Concord grapes are used to make wine). At a Missouri winery a few years ago we tasted Norton, a variety of Vitis aestivalis that is the cornerstone of that state’s wine industry (and the state’s official grape).  Other less-familiar grape varieties may be hybrids of better-known varietals, or a cross between European and North American ones.

One easy way to find unfamiliar varieties is to look at wines from emerging wine-exporting areas such as Uruguay or Hungary, whose local vinifera grapes are just showing up on store shelves.

Or you can just wander through the liquor store reading labels, looking for grape names you don’t recognize. Which is how we found our first two choices: a Greek Agiorgitiko and an Italian Negroamaro.

Agiorgitiko is an important red grape in Greece, sometimes referred to “the noble red grape.” We found this wine to be earthy and leathery on the nose and very smooth in the mouth, with lots of berry and a bit of spice (although not Shiraz-level). It was also very reasonably priced for its quality. Boutari, founded in 1879, has wineries all over Greece, and seeks to preserve and promote Greek varietals, shipping them all over the world…much to our benefit!

“Negroamaro” means “black bitter” in Latin. A grape hailing from the “heel” of Italy, it’s often blended. On its own, as we found it, it is well-rounded, without a lot of tannin, but perhaps better as an accompaniment to food than for sipping on its own.

Having taken a hit-or-miss approach for our first two unfamiliar wines, we next asked a couple of experts, who pointed us to two more wines, one from Italy, one from France.

Vermentino, a white grape varietal grown on the island of Sardinia, off the coast of Italy, as well as in southern France, is being used for more and more New World wines. It was by far our favorite of our we’ve-never-heard-of-these-before quartet, light and fruity (peach and apricot), with an excellent balance of acid and sugar and delightful honey characteristics.

We hit the jackpot with this wine, which blends six wines (Ugni Blanc, Colombard, Gros Manseng, Chardonnay, Sauvignon and Folle Blanche), four of which were mostly unfamiliar to us.

Ugni Blanc is widely planted in France and, under the name St-Emilion, is the predominate grape in cognac. Gros Manseng is grown almost entirely in southwest France and is also most often part of a blend. As for Colombard, while its plantings are declining in France, it is increasing in popularity in California and South Africa.

On the nose, we detected pear; in the mouth, green apple, giving it a kind of “sharpness” on the palette.

“There are more wines in heaven and earth…than are dreamt of in your philosophy,” Shakespeare famously wrote.

Or would have, had he been a wine writer. 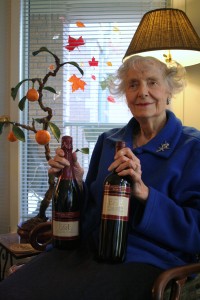 We first tried E&E Black Pepper Shiraz at the International Wine and Food Festival at the Banff Springs Hotel. When we discovered that the Still was sold out at the on-site wine store we decided to try the Sparkling. It was our first sparkling red and it remains our favourite. Various vintages continue to deliver a complex dark red/purple wine full of ripe blackberry, coffee, dark chocolate and spice. It’s a splurge wine, but well worth it.

Dr. Alice Goodfellow is a retired paediatrician who practiced in Regina during the 1950s and early 1960s. She is a long-time wine enthusiast, belonging to a number of local wine societies. 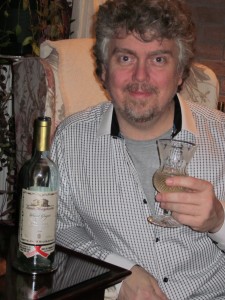 Some people think that Pinot Grigio wines are too mass-produced and a little tasteless. (I’ve heard them described as the vodka of wines.) And then you taste something as wonderful as the Santa Margherita Pinot Grigio Valdadige, and everything changes. This is a great crisp wine, with excellent tang and lovely hints of citrus and quince. (Which, oddly, rhymes.) It’s a little pricier than most Pinot Grigio, but the flavour and complement it brings to so many foods makes this well worth it. I love Italian wine. I love big bold flavours. For a white wine, this is perfect.

Robert Ursan, a composer, performer, music teacher and director, is Music Director for Do It With Class Young People’s Theatre Co. and co-Artistic Director of The Golden Apple Theatre. 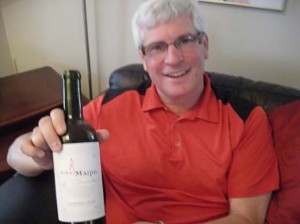 “Great Devotion” is what I tasted when I happened upon this blend from Chile. The soft tannins of the Carmenere embrace the peppery spice of the Syrah to produce a full, round, deep, dark, sensuous glass for your sipping pleasure. This wine is bold enough to pair nicely with the most savory of foods, red meats and lively cheeses, yet friendly enough to drink on its own.  I’m not sure what percentage of each grape is used, but they got it right; and priced under $20, it’s a bargain.

Gerry Bezaire is a New Home Specialist employed by Boychuk Homes in Saskatoon and a food and wine enthusiast.

Permanent link to this article: https://edwardwillett.com/2010/12/the-willetts-on-wine-madeleine-angevine-and-beyond-adventures-in-wine-tasting/