Goodreads giveaway for my SF novel Right to Know… 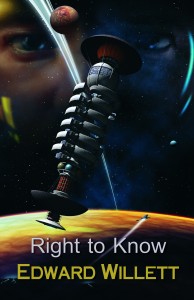 …just went live. There are five copies up for grabs from Bundoran Press. Go forth and enter!

And just to remind you about the book:

“An inspiring tale of redemption and courage, set in an all-too-plausible future in space. Well done!” – Julie Czerneda, author of The Clan Chronicles

A fast-paced space opera about first contact – with a difference. When Art Stoddard, civilian information officer of the generation ship Mayflower II, is kidnapped by a secret military organization determined to overthrow the power of Captain and crew, he becomes embroiled in a conflict that tests everything he thought he knew. Now, he is forced to choose between preserving social order and restoring the people’s right to know. But what if knowledge is the most dangerous thing of all?

Permanent link to this article: https://edwardwillett.com/2013/08/goodreads-giveaway-for-my-sf-novel-right-to-know/