My latest book: The Adventures of Michael & Mia: Stewards of the Land

Cover art revealed for The Cave Beneath the Sea 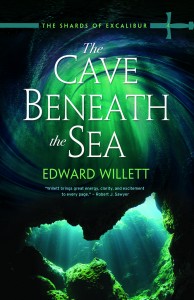 Here’s the cover art for The Cave Beneath the Sea, Book 4 of The Shards of Excalibur YA fantasy series from Coteau Books. Book 1 was Song of the Sword, Book 2 was Twist of the Blade, Book 3 is The Lake in the Clouds (coming out May 1). The Cave Beneath the Sea is due out this fall and Book 5 will be out next spring, to wrap up the series.

Pretty cover, isn’t it? They all are. Collect the whole set!

Permanent link to this article: https://edwardwillett.com/2015/03/cover-art-revealed-for-the-cave-beneath-the-sea/