Latest issue of Grain Magazine (which I edited) now out 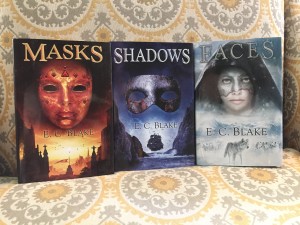 Although I’m still waiting for the bulk of my author’s copies of Faces (which is why the top three winners in my giveaway haven’t received their books yet), Faces has officially hit bookshelves and is available for order through your local bookstores (if they don’t have it in stock) or online at Amazon.com, Amazon.ca, Indigo, Barnes & Noble, and other fine retailers.

Not a lot of reviews yet, but there have been a couple! From RT Book Reviews, which gives it four stars:

In his final installment in the Masks of Aygrima trilogy, Faces, E.C. Blake builds on the suspense created in the previous installment. Readers will see the characters grow and change as they face troubles in both the war against the Autarch and in their personal lives. Blake creates a perfect balance between the action and emotion, forging a deep connection between the reader and the characters.

The first review at Amazon.ca is nice, too:

I thought Faces was the best book of the Masks trilogy. Unlike most series I’ve read that have gotten weaker with each book, Masks started off strong and got better and better with each passing release. The action moves at a fast pace in the book. There are plenty of plot twists and turns before coming to a surprising climax.

And a very well-written review on Goodreads also offers praise:

I can honestly say that while Mara Holdfast might be at her lowest point in this novel, she still has the uncanny ability to grow and expand exponentially while exploring the vast lands around her in very believable, yet often unpredictable ways….The character growth for Mara was astounding, as well as with the Lady of Pain and Fire…E.C. Blake has done a magnificent job with this trilogy, which seems to have gone unnoticed by a significant number of readers of fantasy. I truly hope that this is a success and that Blake returns to Aygrima in the near future with more epic feats amongst tyrants, villains, heroes, and heroines.

Have you got your copy yet?

Permanent link to this article: https://edwardwillett.com/2015/07/faces-makes-it-official-i-have-committed-trilogy/