The science of New Year’s

Aerotarandusdynamics: the science of flying reindeer 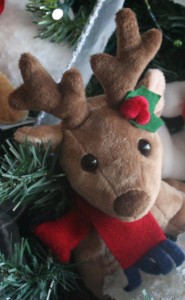 At this festive season, aerotarandusdynamics, one of the least-known branches of the vast tree of science, finally comes into its own.

“Aerotarandusdynamics” comes from “aero,” air, “tarandus,” the latter part of the scientific name for reindeer, Rangifer tarandus, and “dynamics,” moving.  Hence, aerotarandusdynamics is the study of reindeer moving through the air: flying reindeer.

There are only nine known flying reindeer in the world, which makes them an extremely endangered species .  All are domesticated and belong to an eccentric recluse who lives in the Far North (as far north as you can get) and who will not make his herd available for study.

Fortunately, this gentleman visits the outside world every December 24 to deliver toys to good little children everywhere. (There is considerable military interest in his techniques for year-round surveillance of the world’s youth, but that’s another column.)  Observations gathered during these yearly jaunts provide us with what little data we have concerning flying reindeer.

To begin with, since a male reindeer usually controls several females, it’s assumed that all the reindeer are female except the leader, whose bright red nose could be a gender-specific trait equivalent to the brilliant display feathers of male birds.  (This trait could help researchers pick flying reindeer out of a herd of their earth-bound cousins, if any flying reindeer still exist in the wild–far from certain.)

The reindeer’s master eschews conventional entrances in favor of the chimney, and thus requires the herd to land on sloping, slippery rooftops.  Their ability to do so indicates their feet are probably broader and softer than the hard, sharply pointed hooves of ordinary deer, which are notoriously unstable on ice.  (I refer you to the classic nature documentary Bambi, with its extraordinary footage of a young white-tailed deer on a frozen pond.  Ignore the rabbit.)  This adaptation probably helps them perch in treetops or on mountain ledges, feeding on foliage other animals cannot reach.

To fly, an object must generate enough lift to overcome gravity. Airplane wings are designed so that the air passing over them must travel further, and therefore faster, than the air passing beneath them.  Fast-moving air exerts less pressure than slow-moving air, so the wings–and with them, the airplane–are forced upward.

A large male reindeer such as the quaintly named “Rudolph” stands 1.2 metres at the shoulder and can weigh 115 kilograms.  How can such a large animal generate enough lift to fly?  Well, both males and females have long, slender antlers with branching points that are “palmate” — broad and rather flat, like the palm of a hand.  Aerotarandusdynamicists theorize that in flying reindeer, these palmate points have become exquisitely effective lifting bodies.

When the reindeer make high, bounding leaps, the air rushes over their antlers, creating enough lift to send them soaring.  Once airborne, they use their broad feet to “row” through the air, fast enough to keep them airborne and even pull their corpulent owner in a sleigh.

This, at least, is the Standard Theory.  A new theory, gaining ground in the field’s leading journal, Popular Aerotarandusynamics, notes that reindeer, like other herbivores, generate large quantities of lighter-than-air methane in their digestive tracts.  This suggests the creatures’ weight could be partially offset by gas, perhaps stored in a specialized bladder, but the existence of such an organ must remain speculative until a specimen can be dissected.

Supporters of this “Gasbag Theory” also feel the Standard Theory does not explain the reindeer’s remarkable speed.  They postulate a form of rocket propulsion, again using internal methane. As with so many aerotarandusdynamical questions, more field work is desperately needed.

This December 24, a small army (very small indeed, for our troubled educational system produces almost no aerotarandusdynamicists) will man rooftops around the globe, awaiting a fleeting glimpse of the world’s only flying-reindeer herd.  Lack of funding means they will not have the sophisticated instruments they desperately need, but they hope to glean a few more scraps of data to answer some of the burning questions in this exciting field of research.

So on Christmas Eve, as you toast by your fire, spare a thought for these unsung heroes of science, shivering on rooftops the world over in the pursuit of knowledge — and should you spot one on a rooftop near you, do your bit to support aerotarandusdynamics research:

(The photo: a rare image of a flying reindeer. I should note that some aerotarandusdynamcists have suggested this photo is a fake, but that is a minority opinion.)

Permanent link to this article: https://edwardwillett.com/1995/12/aerotarandusdynamics-the-science-of-flying-reindeer/