Photo of the Day: Happy Anniversary 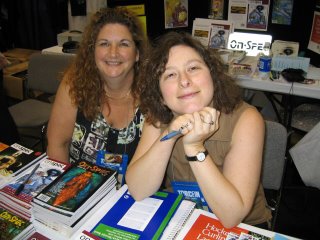 Holly Phillips (that’s her in the foreground at left, at the World Science Fiction Convention in Toronto in 2003) has won the 2006 Sunburst Award for Canadian Literature of the Fantastic for her collection of short stories In the Palace of Repose (Prime Books).

The Sunburst Award is a prized and juried award that is presented annually. It is based on excellence of writing and awarded to a Canadian writer who has published a speculative fiction novel or book-length collection any time during the previous calendar year. Named after the novel by Phyllis Gotlieb, the award consists of a cash award of $1,000 and a hand-crafted medallion which incorporates a “Sunburst” logo, designed by Marcel Gagné.

The Sunburst jury said, “The stories of In the Palace of Repose spring to life from the page. As the characters uncover artefacts of an unimagined past, relive a long-forgotten murder, cope with a memory that suddenly wipes itself clean or struggle to adapt to startling new worlds, Holly Phillips’s masterful writing, depth of characterization and complete control of her craft make this book a joy to read.”

Permanent link to this article: https://edwardwillett.com/2006/09/holly-phillips-wins-sunburst-award/