Photo of the Day: The Totem 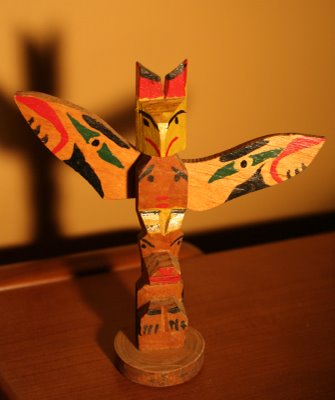 From the “things I found in my mother-in-law’s house” series, this tiny totem pole is labeled, “Made in Canada by Ellen Neel and the Totem Carvers – Kwakiutl Indians.”

It may be one of the 5,000 tiny totem poles Ellen Neel and the Totem Carvers once made for the Hudson Bay Company.

Then again, it may not, since there’s no HBC logo on it anywhere.

Here’s an interesting article on totem poles of the Pacific Northwest.

There’s a book by Phil Nuytten called The Totem Carvers. This page about the book provides quite a bit of background about Neel (it also provides the reference to the 5,000 Hudson Bay Company totems).

UPDATE: In the comments, Lou-ann Neel, Granddaughter of Ellen Neel, posts, “This is definitely NOT an Ellen Neel carving. The ‘design’ work is completely incorrect and clearly that of an amateur. “

That’s interesting, since it’s definitely stamped with her name. Presumably, then, it was a cheap counterfeit someone sold to try to take advantage of Ellen Neel’s name.

I’d love to see an image of one of those Hudson Bay Company totems, though, just to compare. Anyone?

Permanent link to this article: https://edwardwillett.com/2006/11/photo-of-the-day-the-totem/