"Things I Found in my Mother-in-Law’s House…"

Photo of the Day that was Actually Taken on Vacation: Santa Fe Street Scene, Night 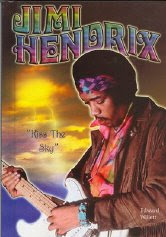 The first guitar Jimi Hendrix set alight on stage has sold at auction for $527,044.

Which is a great excuse for an excerpt from the biography of Hendrix I wrote for Enslow Publishers, Jimi Hendrix: Kiss the Sky:

The Experience finished the album that spring, and called it Are You Experienced. Before it was released, the band did a tour of English movie theatres, as part of a revue that included Cat Stevens and Engelbert Humperdinck and headlined the Walker Brothers. (In Liverpool, when Jimi and Redding sneaked away to a pub between shows, the bartender wouldn’t serve them; he thought they were circus clowns because of their outlandish clothes.)

A fiery performance
On the first night of the tour, a journalist, Keith Altham, was talking to Jimi and Chas Chandler about what Jimi could do to make himself stand out. “It is a pity,” Altham said, “that you can’t set your guitar on fire.”

Jimi immediately got hold of some lighter fluid and began experimenting. That night, at the end of the Experience’s five-song set (the final song was, naturally, “Fire,”), he poured lighter fluid on his guitar and threw a match at it. It burst into flames (on the third attempt) and into rock music legend.

Permanent link to this article: https://edwardwillett.com/2008/09/the-half-million-dollar-guitar/