I’m still in the middle!

Things I Found in my Mother-in-Law’s House: Music

Notes for this week’s CBC radio segment of Things I Found in My Mother-in-Law’s House:

Regina has a long history as a musical city, with musical clubs, choirs, bands and, of course, the Regina Symphony Orchestra getting started within a few years of the city’s founding.

Ed Willett’s grandparents-in-law, Nancy and Sam Goodfellow, were an important part of the city’s musical community for decades, and this week, Ed’s exploration of his mother-in-law’s old house has led him to some music-related items in the living room…which is where I joined him earlier this morning.

Well, Ed, the most obvious music-related artifact here is the grand piano. It’s a beauty! 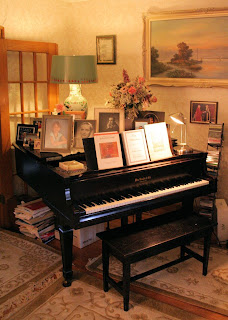 It is, isn’t it? And it’s an interesting make, too, one I’d never come across until I saw this one.

This is a 5 1/2-foot grand manufactured by William Knabe & Co. Inc. The company was founded in 1837 an Knabe pianos are still being manufactured, although the name is now owned by a Korean firm, Samick Musical Instruments. By 1866 Knabe manufactured a thousand pianos a year, and ranked third in the U.S. after Steinway & Son of New York and Chickering & Sons of Boston. Because of their painstaking, hand-crafted approach to piano making, an upright piano could take six months to build, and a grand two years.

They continued to expand until their main factory in Baltimore–which is where this piano was manufactured–encompassed 300,000 square feet. In 1908 the company joined with Chickering & Son and Foster-Armstrong Co. of New York to form the American Piano Co. That company went into receivership in 1930, due to the Depression, and its Baltimore factory was closed.

Which allows me to date this piano within about 15 years. If you look inside, you’ll see an award sticker from the Panama California Exposition of 1915, so the piano has to be older than that. And since it indicates it was made in Baltimore, and that factory closed in 1930, this piano had to be manufactured sometime between 1915 and 1930.

Knabe pianos were known for their mellow tone, and said to be the closest piano in tone to the human singing voice. They became the official piano of the Metropolitan Opera in 1930. According to a 1929 piano reference book I found online, used by piano salesmen, “They combine a rare degree power and sweetness of tone, delicacy and a poetic singing character and a beauty of case design and finish not surpassed.”

Did Sam and Nancy by this piano brand-new?

No, they didn’t. This piano originally belonged–in fact, I’m guessing was bought new, by Madame Alicia Birkett. Madame Birkett was born in England and had a youthful career there in opera an oratorio before emigrating to Canada. She taught voice at the Regina Conservatory from the late 1920s until 1954; after her husband died, she moved back to England, and that’s when this piano was purchased by Sam and Nancy: Nancy had been one of her voice students.

Madame Birkett was soloist for many years at Knox Metropolitan Church and was the founder and the conductor in the 1930s of the Elizabethan Singers. Among her other pupils was Weyburn opera singer (well, she was born in Steinbach, but she grew up in Weyburn) Irene Salemka, who had an international career and whom (as proof that “It’s A Small World After All”) I interviewed when I was a reporter for the Weyburn Review, never thinking I’d one day own the piano once belonging to her voice teacher!

According to my mother-in-law, Dr. Alice Goodfellow, Madame Birkett also taught privately at her home in the Modern Apartments, where she lived on the third floor even though her husband was almost crippled with arthritis: she couldn’t bear to have anyone living above her.

Did your mother-in-law play this piano? 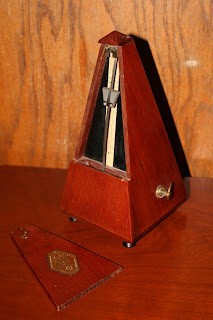 Some, but of course she’d left home long before it came to Sam and Nancy. They had an upright piano when she was learning, in the 1930s. But we do have her metronome: a classic French-made Maelzel Metronome, a direct descendant of the first commercially available metronomes, put on the market by Johann Nepnuk Maelzel beginning in 1816. He’s sometimes credited with inventing the metronome, but apparently he actually, um, appropriated the mechanism from a Dutch inventor, Dietrik Nikolaus Winkel.

Maelzel also invented something called the Panharmonicon, a mechanical device that could reproduce the sounds of a full orchestra, and even prevailed upon his friend Beethoven to write a special piece of music for it, called Wellington’s Victory (Battle Symphony) Opus 91. They had a falling out after Maelzel claimed that the symphony was his own property, which Beethoven adamantly insisted was not true. Nevertheless, Maelzel influenced Beethoven to be the first major composer to put metronome markings on his work. If you ever see, in old music, the marking MM=140, or something similar, that MM refers to one of these: a Maelzel Metronome.

With a piano and a metronome, there must be some old music around somewhere. 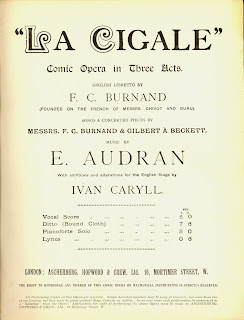 There is. Stacks of it. In fact, someday I hope to create a musical stage show called Songs I Found in My Mother-in-Law’s Piano Bench.

A lot of it belonged to Alice, but there’s also quite a bit that belonged to Nancy. Take these old operetta scores. Here’s one for Merrie England, music by Edward German, which ran at the Savoy Theatre in London for 176 performances in 1902, and another for La Cigale, music by Edmond Audran. Audran wrote more than 30 shows, which a 1909 reference book dismisses as “bright, sparkling and more or less ephemeral.”

Comic operas were popular with amateur dramatic groups around the turn of the last century, in England and in Regina. I don’t know if Nancy performed in any in Regina, but she certainly did in England as a teenager: we even have a photograph of her in costume from an amateur English production of La Cigale.

There’s some newer music here, too. 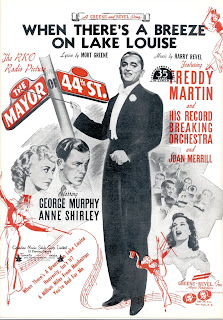 Yes, there’s also a lot of sheet music from the 1930s and 1940s. According to Alice, Nancy was great friends with Helen Jolly, the head nurse at the Regina General Hospital. Helen would buy new sheet music and bring it over to the house, and Nancy would play and both of them would sing. Alice also bought many of these herself, of course. A lot of the copies are stamped with the names of famous Regina music stores: R.H. Williams & Sons; Arcade Music Centre (Trading Co. Bldg., 12th Ave.); W.G.F. Scythe & Co. Ltd, 1843 Hamilton Street; and of course Heintzman & Co. Ltd., 1859 Scarth St.

Sorry? What was that last one?

You never heard of “When There’s a Breeze on Lake Louise?” Neither had I until now, but apparently it was nominated for an Academy Award in 1942! It’s from a movie called The Mayor of 44th Street, a drama about an ex-vaudevillian dancer who opens up a dance band agency to help street kids by hiring them out as musicians. How a breeze over Lake Louise figures into the story, I have no idea. 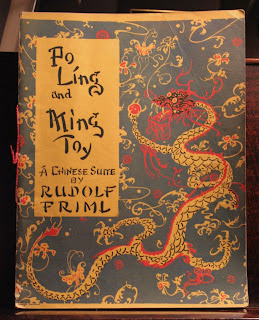 Do you have a favorite piece of music?

This one. It has a gorgeous red, blue and gold cover, with a Chinese dragon on it, and beautiful illustrations inside. The title is “Po Ling and Ming Toy: A Chinese Suite by Rudolf Friml.” Friml is probably most famous as the author of Rose Marie–which is the operetta one might have expected “When There’s a Breeze on Lake Louise” to be from, but the main reason I like it is because inside it it says, “Alice Goodfellow: June 25/36, 1st prize in general proficiency (senior grades).”

This house has been filled with music over the years. I hope that continues!

Permanent link to this article: https://edwardwillett.com/2008/09/things-i-found-in-my-mother-in-laws-house-music/