A political rant we can all get behind

You’re invited to my book launch!

Things I Found in my Mother-in-Law’s House: Souvenirs

Notes for this week’s CBC radio segment of Things I Found in My Mother-in-Law’s House.

UPDATE: Listen to the actual interview!

Souvenirs seem to have some strange mesmeric power over travelers. You visit a place with beautiful scenery, a long and fascinating history, great restaurants and a vibrant night life, and somehow you decide the best way to remember it is to buy a dish towel.

But hang on to those souvenirs long enough, and they become interesting in their own right.

So, Ed, that’s a very odd collection of objects you’ve spread out on the table here. Is that really a cream pitcher in the shape of Winston Churchill’s head? 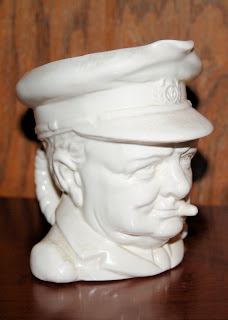 Yes, it is, and it’s the perfect example of the sort of thing I thought we’d focus on this week. Nancy Goodfellow, my wife’s grandmother, grew up in Stoke-on-Trent, in the heart of the region of Staffordshire that’s famous for its potteries. So it’s perhaps not too surprising that, when she and her husband, Sam, went back there to visit, they returned with souvenirs from those potteries.

Which is what this is, I presume. It is indeed a cream pitcher in the shape of Winston Churchill’s head. He’s wearing a Navy hat and has a stubby cigar clamped in his mouth, and on the bottom of the pitcher it says, “We shall defend every town, every village and every city, Churchill Premier 1940.” Then, over on the side, you see the name Burleigh and, of course, Made in England.

This is what’s called a character jug, and it’s the descendent of something called the Toby jug. Toby jugs first appeared in the early 18th century, and showed a seated man with a mug in his hand, wearing a tricorn hat which made a pouring spout. He may have been named Toby after Sir Tobey Belch in Shakespeare’s 12th night, or he may have been named after Toby Fillpot, the central character in a popular song from 1761 called “Brown Jug.”

In any event, Doulton revived the Toby Jug in the 19th century, and then expanded into a line of character jugs. The first character jugs were introduced in 1934 and featured fictional characters, beginning with John Barleycorn, but in 1936 the first jugs based on real people appeared, and they’re still being made today.

Their popularity led other potteries to make them, too, which is where Burleigh came in. The company began life in 1851 as Hulme and Booth. In 1862 William Leigh and Frederick Rathbone Burgess formed a partnership and changed the name to Burgess & Leigh, which the current name is a contraction of. During the war and after, the company put out a lot of Churchillania, including this. The designs were created by the company’s chief designer, Earnest Bailey. And interestingly enough, a collection of pieces that belonged to him were auctioned off in Hanley, England, Monday and Tuesday of this week.

I don’t know if this piece was made in 1940 or if the date on it only reflects when Churchill made the featured quote. I’d like to think the former, because I ran across a newspaper item that said, in reference to Burleigh ware, “A 1940 jug of Churchill, crouched down with cigar, fetches around pounds 160.” Where’s the Antiques Road Show when you need them?

That’s not the only pottery item you have here. There’s also a Scotty dog and…is that an airplane? 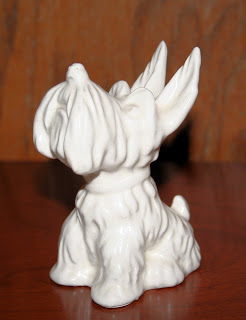 Yes on both accounts, and again, these were undoubtedly purchased as souvenirs during a trip to England. But before I talk about them, I want you to look very closely at the nose of the dog. See anything?

I’ve been looking at this thing for months, because it’s been on my desk upstairs, but only when I started researching it did I discover that the dog, which admittedly looks a bit cross-eyed, is staring at a ladybug on its nose. So it took the Internet to point out what was under my own nose all this time.

This is one of the animal figures made by Beswick, another famous Staffordshire pottery firm, but one that, unlike Burleigh, no longer exists: it was purchased by Royal Doulton in 1969 and the brand name was phased out in 2002. Anyway, Beswick, founded in 1894, became famous in the post-war years for its animal figures, modeled by Arthur Gredington. They were very popular through the 1950s and 1960s, and are quite collectable today. 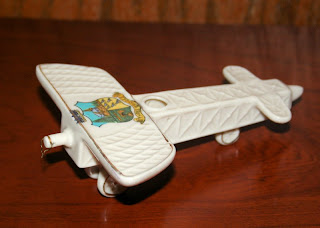 The airplane is a First World War monoplane, maybe not too dissimilar to the one that Sam flew in–and was shot down in–as a navigator. The propeller broke off of it at some point, but is still ratting around inside. It was made by a company called A&S, which stood for Arkinstall and Sons. A&S was one of several companies in the early 20th century that made this kind of crested china, meaning that it has–as you can see–the crest of a particular town on it, in this case Three Bridges. Since Arcadian China was only made until 1924, this must have been made sometime between 1914 and 1924. I suspect Sam bought it because it was an airplane rather than because of any particular interest in the town of Three Bridges. And if you think a military aircraft is an odd choice to render in porcelain, you should see some of the other World War One pottery memorabilia I ran across in my research, including machine guns, binoculars, airships, German bombs, artillery shells, aerial torpedoes and (my favorite) a lovely ceramic hand grenade.

But you’ve got other stuff besides pottery. What else have you uncovered? 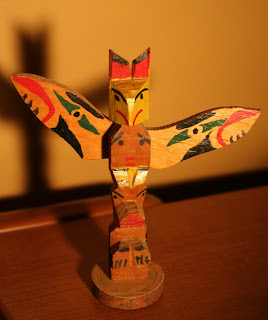 Here’s an interesting one. It’s a tiny totem pole is labeled, “Made in Canada by Ellen Neel and the Totem Carvers – Kwakiutl Indians.”

Ellen May Neel was the granddaughter of famous totem pole carver Charlie James. She was born in Alert Bay, B.C., in 1916, and by the age of 12, with his instruction, was able to carve well enough to sell her totem poles to tourists who came to her home town of Alert Bay. She moved to Vancouver in 1943 with her husband, Edward Lyle (I originally had his name as James Neel, but one of Ellen’s daughters has corrected that–see comments. – Ed.), but in 1946 he suffered a stroke and could no longer work full time. Ellen became the primary bread winner for a family of six children, and recruited them into making souvenir totem poles for the tourist trade. She set up shop in Stanley Park in the summer. She was commissioned to create a few large poles (there’s one today at the University of British Columbia) but much of the family output consisted of little poles similar to this one for the tourists.

I posted this on my blog a few months ago and received a comment from Neel’s granddaughter saying this was definitely not an Ellen Neel piece, since the “design work is completely incorrect and clearly that of an amateur”; however, a later anonymous commenter indicated he or she had been told by one of Neel’s daughters that since her children were not skilled artists, she had to “dumb down” her own work in order to simplify them so they could be made and sold more cheaply. “Neel knew the forms were not really right, but it was more important to her that she be able to feed her family,” this commentator said. In a later comment on this post (you can see it below), one of Neel’s daughters, Pam Creasy-Neel, tells me this one of Neel’s early (but not the earliest) of what they called “cello poles,” because they were packaged in cellophane bags with accompanying information.

Neel died in 1966. She was only 49, and she’d struggled for years in poverty before that.
Whether this totem was purchased in Stanley Park or was one of the 5,000 tiny totem poles she once made for Hudson Bay Company, I don’t know, but it’s an interesting piece of Canadian art history, all the same. 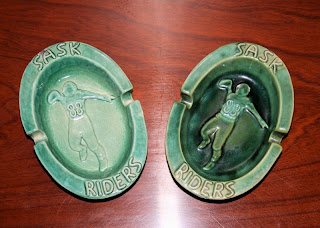 Presumably you wouldn’t say the same about these Saskatchewan Roughrider ashtrays.

Two of them, green, with a player wearing number 88 on them. They go nicely with these small marble bookends in the shape of footballs.

Sam and Nancy had Roughrider season tickets beginning, I think, in the 1950s, tickets that were passed on to Margaret Anne’s parents, and which we now keep renewing every year. And those aren’t the only Regina souvenirs to be found here. 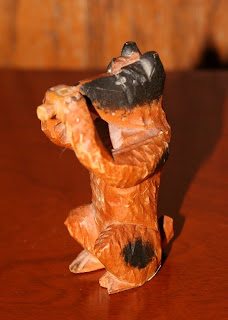 I think my favorite is this: it’s a small dog that looks like a wood carving (though I think it’s plastic), sitting on its haunches, with a camera pressed to its nose (the artist apparently unable to figure out how to have the dog hold it to its eyes with that big muzzle in the way). And on the bottom, it says “Souvenir of Regina.” Because what says Regina like a camera-toting dog?

But just as we’ve got all these souvenirs of Staffordshire, I’d like to think that maybe someone in England has one of these…and is even now looking at it and wondering what on Earth he’s just turned up in his mother-in-law’s house.

Permanent link to this article: https://edwardwillett.com/2008/09/things-i-found-in-my-mother-in-laws-house-souvenirs/