Where I’ll be next weekend

My review of the National Arts Centre Orchestra… 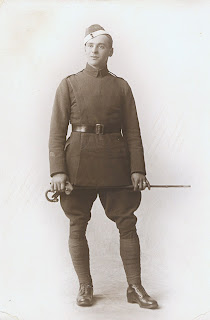 Tomorrow is Remembrance Day, the 90th anniversary of the signing of the Armistice that ended the First World War, and in honour of that, I’m going to start doing something I’ve wanted to do for a long time: posting the First World War memoirs of my grandfather-in-law Sampson John Goodfellow.I’ll post a few pages almost every day, I hope. They make for fascinating reading.

Sam ended the war in a German POW camp after the Hanley Page bomber in which he was an observer for was shot down. He didn’t suffer a scratch. He was one of the lucky ones.

But then again, if he hadn’t been, I wouldn’t have married his granddaughter, and would never have known these memoirs existed.

The memoirs, written sometime in the 1970s, actually cover his life pre-World War One (and a bit after) as well, but I’m going to limit myself to the war memoirs, beginning today with his enlistment.

Toronto Technical School had only a class of 25 and we sat for our matriculation the summer of 1914. When we got the Algebra Examination Paper, there were questions we could not answer. Anyway, we tried our best.

We had only gone as far as Permutations, Combinations and the Binomial Theorem.

Mr. Warren came into our examination room, saw us with long faces and asked what was the matter. He looked at the examination paper and said something was wrong here.

“Some of these questions are not on your curriculum.”

That summer I got a job on the New Welland Ship Canal as a Machinist with Dominion Bridge. I was more taken with the idea of being a Civil Engineer.

Dr. MacKay, our Principal, took the matter up with the Department of Education and it was agreed that we all had passed in Mathematics. Therefore, our Head Master, Mr. Warren, informed us that we did not have to attend school. He told us that we were free to go and enlist in the Services if we wished.

We had a meeting outside on the steps of the School to talk over what Unit it would be best for us Engineering Students to enlist in.

They were having a difficult time getting qualified personnel so the students thought that would be O.K. to join.

The students appointed me to go and have an interview with the Adjutants of the 2 (two) Units, which I did. The Adjutants were delighted when I informed them that there was approximately 25 of us.

They told me of the requirements for us to get into either one of the Units.

We had to pass a mechanical knowledge examination and a driving test.

We had another meeting of the students, who had not enlisted; as some of them, through the influence of their parents, received Commissions in different units leaving about 18 of us.

I explained what took place at the meeting; about mechanical and driving tests, and they all agreed they could pass the tests. But they suggested I enlist first which I did.

This took place on a Friday. I was interviewed by the Adjutant of the Supply Column to have my test on Monday.

I went over to T. Eaton’s Store and purchased a book on the Theory of the Automobile which I studied the Saturday and Sunday.

I sat for the Verbal examination and did so well that they would not give me a 100%. They kept crossing me until I made a slip in the number of thousandths gap in the Distributor and Spark Plugs. I told them and then corrected myself, but they would not allow it and gave me 91%. I knew more about an Automobile than the individual who examined me; he was looking at a question and answer list.

He told me to wait and he went and had an interview with the Adjutant. Both of them had a long conversation then returned to interview me.

They wanted the particulars of my knowledge, and I just told them I was a matriculation student from Toronto Technical School, studying to go to the Toronto School of Practical Science, to study to be a Civil Engineer. I did not tell them I was a Machinist, and a Mechanical Draftsman; as they would have had me sent to Engineering Units that were short of these professions, and I would be kept in Canada. I wanted to go overseas.

They informed me if I enlisted they would make me a Lance Corporal and at a later date a Sergeant but for the present I would be the Automobile Mechanical Examiner.

I agreed and enlisted at that meeting.

I then told the rest of the students what had taken place and to come down on Tuesday which they did.

I passed them all; some joined the third division Supply Column and some the Ammunition Column.

I was the first to take a driving test and passed but admonished not to be such a fast driver.

Permanent link to this article: https://edwardwillett.com/2008/11/the-first-world-war-memoirs-of-sampson-j-goodfellow-part-1/