I haven’t posted about the Great Saskatchewan Meteorite…

My review of Globe Theatre’s Anne of Green Gables… 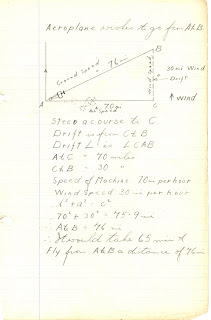 The ten of us left for Stonehenge to begin our Navigation Course and it was a terrible course, a very difficult one.

The Theoretical Part was very difficult and you had to be on your toes all the time because the Flying Instructors gave you no mercy.

The actual flying was wonderful. We were supplied with Drift Indicators to lay out our course and taught how to use them.

I got so proficient that I learnt to use them as a slide rule.

They would tell us where to go such as Southampton, Oxford or Winchester.

We got no help from the Pilot who was to fly the aeroplane or Hanley Page. We got our Objective. It was up to us to ask the Pilot what altitude he wanted to fly at. 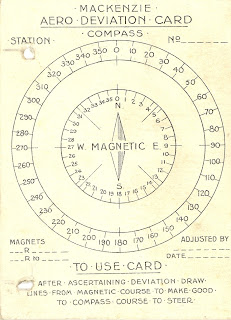 We were finished with him. We went to the Atmospheric Hut and got the direction of the Wind at the correct altitude and miles per hour.

We then calculated our course on the drift calculator, and gave it to the Pilot. The degrees to the target to and from.

Before leaving the Aerodrome, we would check the wind direction and speed of the wind, as sometimes it changed very quickly and then we had to make a quick calculation and inform the Pilot with the new information.

Then away we would go. I was always lucky, to get over the target and reach home base exactly.

One time we flew late at night to Oxford and went over the University which was our target.

Reached Home Base and half way to land, when a new 2-350 H.P. Hanley Page was doing the same. I just caught it in time, waved my arm to the left and the Pilot got our Pusher Plane out of the way, a Vee Type. 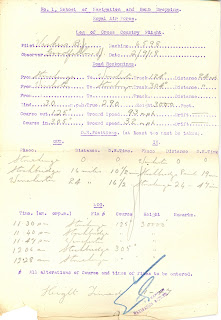 We passed the Aerodrome, just about, touching some of the Hangars and the Pilot trying to land. I could see the top of the trees, he went on, and suddenly we hit the ground a few feet from an infantry trench.

I got out my Very Pistol which was loaded with the colors of the day and fired. After a hour they located us and drove us to our base.

The Pilot was complimented for his quick action in evading an accident.

There would have been the devil to pay if it had been wrecked.

The next adventure I had was a Cadet who had got his wind up at night flying and asked me would I take his place. I said O.K. and climbed into the Vee, a Pusher Type Plane.

Along came an instructor and said, “What are you doing up there?”

I said, “I was taking Cadet So & So’s place, someone in his family is sick.”

“Like Hell you are! Get out of the Plane. The Pilot here is going up to do his solo night landing.”

Did I jump out of the Plane Presto! Quick!

The Poor Pilot was dead a few minutes after take off. He had hit a fence and the engine had crushed him.

The next episode was terrible–nearly ended my career as a flyer.

Permanent link to this article: https://edwardwillett.com/2008/11/the-first-world-war-memoirs-of-sampson-j-goodfellow-part-18-two-close-calls/